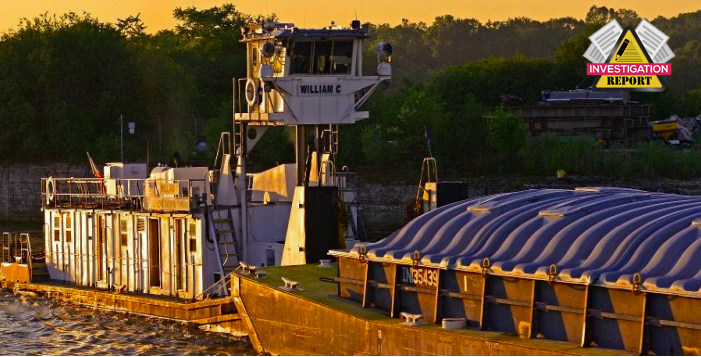 NTSB issued an investigation report on the contact of tow William C with a Rock Island railroad bridge protection cell, on Des Plaines River, in January 2020. The investigation established that high speed prevented the pilot to correct the tow’s position after completing the transit through the previous bridge.

At 0032 local time on January 1, 2020, the towing vessel William C was pushing a tow of six loaded hopper barges on the Des Plaines River, near Joliet, Illinois, when the tow’s two forward barges struck a protection cell for the Rock Island Railroad Bridge at mile 287.6.

Several tow lines broke, and two barges sustained minor damage. The bridge ceased operations for 10 days, and damages to the bridge’s protection cell were estimated to be greater than $500,000. There were no injuries or pollution.

​The National Transportation Safety Board determines that the probable cause of the contact with the Rock Island Railroad Bridge protection cell by the William C and tow was the pilot’s inability to correct the tow’s position after completing the transit through the previous bridge, in part due to the higher-than-average current speed.

The pilot controlled the William C tow without issue from the Illinois Marine Towing Fleet facility at mile 299, traveling with the current at a speed of 5 mph over ground—approximately 2 mph over the speed of the river—in order to maintain steering control.

At the time the tow was passing through the Cass Street Bridge and approaching the Jefferson Street Bridge, the following current in the bend would have been impacting the vessel’s starboard quarter, pushing the tow over to port and the left descending bank.

Since the bow of the tow was already approaching the Jefferson Street Bridge, the pilot continued his course until the William C had passed the bridge.

Once the vessel had passed through the bridge, there was only about 1,200 feet for the pilot to maneuver the approximately 662-foot-long tow back to the center of the channel before reaching the Rock Island Railroad Bridge protection cell near the left descending bank,

The pilot attempted to move the tow to starboard, but, since the following current was pushing against the tow, it continued toward the left descending bank.

When the pilot determined there was not enough time to move the vessel in order to avoid striking the bridge, he reversed both engines to slow the vessel, which reduced the force of the impact but did not prevent the barges from hitting the bridge’s protection cell.