NTSB issued an investigation report on the explosion and subsequent sinking of barge Alaganik in the Canal Passage, off Alaska in July 2019, which resulted in one fatality. The investigation identified ignition of gasoline vapor from a fuel cargo tank as key cause of the accident.

On July 7, 2019, at 2339 local time, an explosion occurred on the barge Alaganik as it was moored port side to the end of the Delong Dock in Whittier, Alaska.

The vessel was serving as a platform for pumping fish cargo ashore from fishing vessels and tenders that came alongside.

It also provided diesel fuel and gasoline to the fishing vessels. No cargo operations were ongoing when the explosion occurred.

Despite the efforts of shore-based responders to fight the ensuing fire, the vessel eventually sank in 60–80 feet of water. The single crewmember aboard the vessel died in the explosion.

About 1,896 gallons of gasoline and diesel fuel stored on board the vessel were consumed by the fire or released into the environment.

The National Transportation Safety Board determines that the probable cause of the explosion on board the barge Alaganik was the ignition, from an undetermined source, of gasoline vapor from a fuel cargo tank, which became entrapped within the vessel’s port pontoon compartment.

In 2018, NTSB investigated a fire aboard the small passenger vessel Island Lady that resulted in the death of a passenger and the loss of the vessel. Like the Alaganik, the Island Lady’s fuel tank gauge glasses were constructed of clear plastic tubing and did not have automatic shutoff valves that would have prevented fuel flow in the event the gauges were damaged.

The NTSB concluded that the use of the tubing and the lack of shutoff valves resulted in the release of fuel, which contributed to the severity of the fire on the passenger vessel. When the Alaganik was salvaged, the gauge glass for each port fuel cargo tank was found to be disconnected on one end. On the forward fuel cargo tank gauge glass, the tubing was melted.

Similar to the Island Lady, the material of the gauge glasses and lack of automatic shutoff valves likely resulted in the release of additional fuel from the tank that fed the fire. However, unlike the Island Lady, which was subject to regulations specific to small passenger vessels, the Alaganik was not required to have gauge glasses made from heat-resistant material or to have automatic shutoffs.

-Storage of Gasoline aboard Vessels

Mariners must use extreme caution when storing, transporting, or transferring gasoline because of its high volatility and flammability.

Vessel owners and mariners must ensure that components and equipment near flammable liquids or vapors are properly grounded and intrinsically safe. 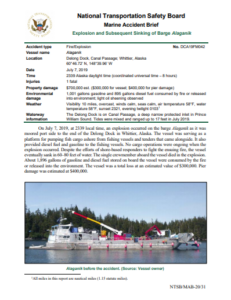