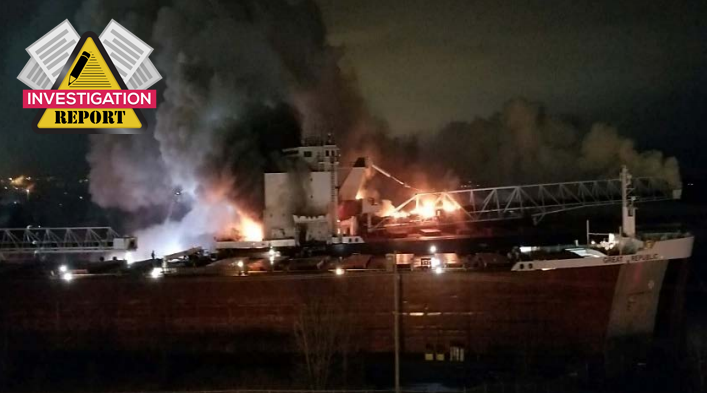 About 2010 local time on February 16, 2019, a fire was reported on the bulk carrier St. Clair while the vessel was laid-up for the winter at the CSX TORCO Iron Ore Terminal (TORCO dock) at the mouth of the Maumee River in Toledo, Ohio. No one was onboard.

The fire was extinguished approximately 36 hours later by shoreside firefighters.

There were neither pollution nor injuries. The estimated property damage exceeded $150 million.

The National Transportation Safety Board determines that the probable cause of the fire was the ignition of combustible material in the vicinity of an engine room workshop, likely due to the use of portable space heaters or smoldering smoking materials, which spread to other areas of the vessel.

Contributing to the extent of the fire damage was the lack of operating procedures for continuous active monitoring of the vessel while in layup status.

Although the H Hansen employee had identified smoke within the engine room at 1645, he assumed it was residual smoke from the hot work that occurred in the no. 6 port ballast tank and therefore did not investigate it further.

This smoke was most likely emitting from a smoldering hotspot, possibly from a burning piece of wood or trash, which eventually developed into the fire that severely damaged the vessel.

By turning on the starboard exhaust fan in an effort to remove the smoke, and leaving it on when he departed at 1800, the movement of air within the engine room may have assisted with accelerating the growth of the smoldering hotspot into a fire.

With no company policy or procedure requiring continuous active monitoring of the vessel while it was in layup status, the fire was able to expand for approximately 3 hours before the fire department arrived.

Since most watertight doors and access manhole covers to ballast tanks remained open, there was nothing in place to stop or hinder the passage of smoke and fire.

While there was extensive damage throughout the engine room, the fire pattern and damage on the lower level noted by NTSB investigators indicated that the fire did not start within or by the no. 6 port ballast tank where the hot work was being conducted the day of the casualty.

In addition, the fire pattern and damage on the lower level also indicates that the fire did not start within the starboard generator space where maintenance was previously conducted.

Given the location of the hot work and based on the structural damage found during the investigation, the fire appeared to have originated just outside the workshop on the third deck on the starboard side of the engine room where the contractors regularly took their breaks.

While numerous possible sources of ignition were identified in this area—including the propane heater, permanent (hardwired) and portable electric heaters, and heat lamps, as well as cigarette smoking in the break area—the exact source could not be determined.

However, there was a lot of combustible material in this area, including wood and the lubricants used in the engine room.

After the conveyor belt caught fire, it provided a path for the fire to expand forward to the bow and up into the deckhouse and onto the cargo boom. 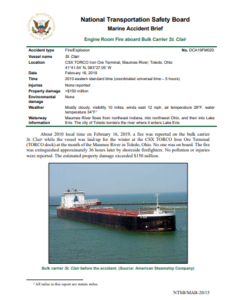