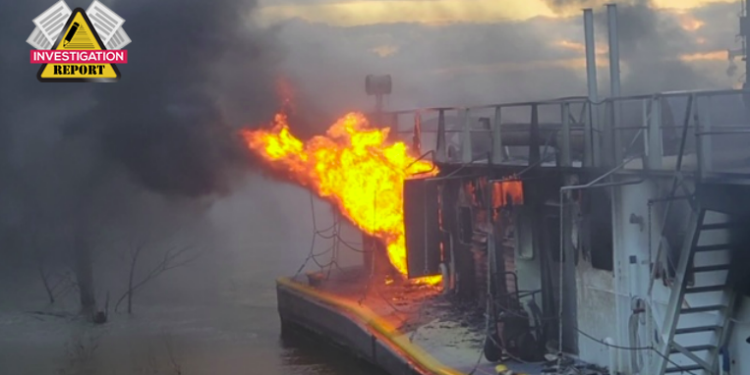 NTSB issued an investigation report on the engine room fire aboard the towing vessel City of Cleveland on the Lower Mississippi River, in February 2020. The investigation identified catastrophic engine failure and crankcase breach of the port main engine, as key cause of the incident.

On February 26, 2020, about 1600 local time, the towing vessel City of Cleveland was pushing 18 dry cargo barges (15 loaded and 3 empty) upbound on the Lower Mississippi River, approximately 15 miles south of Natchez, Mississippi, when the vessel experienced a main engine failure followed by an engine room fire.

All nine crew members safely evacuated to the barges and were rescued by nearby Good Samaritan vessels, which worked to extinguish the fire.

The City of Cleveland was later towed to the operator’s facility in Rosedale, Mississippi. There was no pollution or injuries. Damage to the vessel was estimated at $2 million.

The National Transportation Safety Board determines that the probable cause of the fire aboard the towing vessel City of Cleveland was the catastrophic failure and crankcase breach of the port main engine, resulting from the failure of a connecting rod assembly.

Contributing to the severity of damage to the vessel was the lack of a fixed fire-extinguishing system for the engine room, as well as the loss of electrical power to the single fire pump.

In addition, the vessel’s firehoses were accessible, but the crew could not use them because the running generator in the upper engine room was starved of combustion air and shut down, and the vessel lost electrical power, rendering the single fire pump inoperable. Therefore, the two semi-portable extinguishers, stowed on each side of the upper engine room, were the only means for the crew to fight the conflagration.

The crew had previously performed fire drills aboard the City of Cleveland and planned to fight a possible engine fire by dropping the semi-portable extinguisher hoses and nozzles to the lower engine room and releasing the extinguishers’ dry chemical. However, the portside extinguisher was inaccessible due to the flames, and the hose on the starboard extinguisher failed proximate to the extinguisher.

Additionally, given that the fire was largely fueled by flammable liquids, initially outboard of the port engine and well forward of where the extinguishers were stowed, it is unlikely the crew’s initial plan to use the extinguishers would have succeeded.

Without an effective means to fight the fire, the crew was forced to evacuate to their tow before being picked up and rescued by a nearby Good Samaritan vessel.

This report follows release, last week, of the investigationn into on the fire and explosion onboard the towing vessel ‘Susan Lynn’, off Lousiana, in October 2019, also identifying catastrophic engine failure as key cause of the accident.

Designers and operators of towing vessels should evaluate fire hazards and provide effective means to mitigate them. Operators should have equipment and procedures in place to quickly contain and suppress engine room fires before they can spread to other spaces and/or cause a loss of propulsion and electrical power.