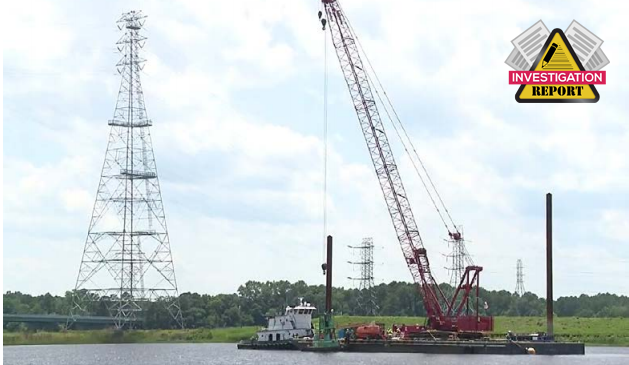 NTSB issued an investigation report on the contact of the crane barge U1510, pushed by the towing vessel Goose Creek, with overhead powerlines, while on the Elizabeth River, in June 2019. The report highlighted poor company oversight and lack of a towing safety management system.

At 1134 local time on June 20, 2019, the crane barge U1510 (with three persons onboard), being pushed by the towing vessel Goose Creek (with three crew members onboard), struck three overhead power transmission lines while transiting to Precon Marine on the southern branch of the Elizabeth River in Chesapeake, Virginia.

There was neither pollution nor injuries. Damage to the powerlines and crane barge was estimated at $226,204.

The National Transportation Safety Board determines that the probable cause of the contact of the towing vessel Goose Creek’s tow, crane barge U1510, with the overhead powerlines was the tow’s captain not identifying the risk of raising the boom as the tow approached the powerlines due to the lack of company oversight, demonstrated by the company not implementing a towing safety management system or hiring a properly credentialed mariner to operate the vessel.

Although the captain and crew were hailed by the Island Girl, warning them of the nearby powerlines, the captain allowed the construction workers to continue raising the crane boom while approaching the powerlines, and the captain, superintendent, and crane operator all proceeded on the intended route.

The captain, who was responsible for ensuring that the vessel was safe to transit the intended route, did not conduct effective voyage planning because he did not consider all overhead obstructions and identify his tow’s air draft restrictions for each along the intended route prior to getting underway, the report underlined.

The company did not have any written procedures or policies regarding voyage planning or the consideration of the tow’s maximum air draft in conjunction with the vertical clearance of overhead obstacles.

Planning and preparation before a tow commences is critically important, including the identification of charted vertical clearance along the route and adherence to operational limits.

In addition, although the company did not have voyage planning procedures or policies, the captain stated that he held a pre-transit discussion.

However, this discussion proved to be ineffective, since the captain, superintendent, and crane operator were aware of the powerlines but did not take appropriate steps to prevent encroachment, including setting a maximum vertical height (air draft) of the crane when passing under the powerlines prior to the voyage with all involved personnel.

Had the company established a TSMS that included voyage planning with requirements for calculating a tow’s air draft and identifying all operational restrictions along the route, the crew would have been less likely to raise the boom while transiting.

Under 46 CFR Subchapter M, the movement of a towing vessel and its tow must be under the direction and control of a properly credentialed captain, mate, or pilot at all times.

The captain did not possess a valid Coast Guard license commensurate with the requirements for the Goose Creek (master of towing vessels not more than 100 gross registered tons).

There is no indication that the company attempted to verify that the captain had the proper credentials or training. Therefore, the company neglected to properly man the Goose Creek with a credentialed mariner to command and control the towing operations.

Regardless of requirements, planning and preparation before a tow commences is critically important, including the identification of charted authorized overhead vertical clearance along the route.

Overhead powerlines pose a risk to vessels and tows with high air drafts. Owners and operators should develop voyage plans that assess operational risks and hazards, to include air draft relative to overhead powerlines and bridges along the intended route. 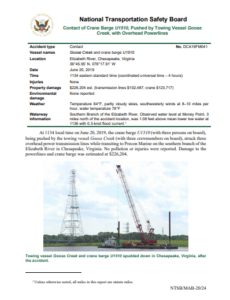