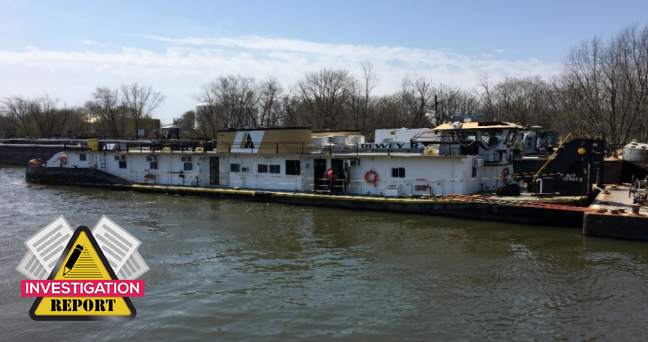 NTSB issued an investigation report on the contact of towing vessel Dewey R with CSX Railroad Bridge Protection Cell in Chicago Sanitary and Ship Canal, in April 2019. The report highlighted the pilot’s departure from the centerline of the channel as his visibility was reduced.

About 0123 on April 13, 2019, the Dewey R, with a crew of eight, was pushing a tow at mile 312.3 on the Chicago Sanitary and Ship Canal in Summit, Illinois, when the lead barge, ATC 3404, struck a protection cell on the south side of the CSX Railroad Bridge.

The protection cell was displaced about 4 feet and impacted the southern concrete pier of the bridge.

There were no reports of injuries, pollution, or water ingress.

NTSB determines that the probable cause of the contact of the Dewey R’s lead barge with the south-side protection cell for the CSX Railroad Bridge was the pilot’s departure from the centerline of the channel as the tow approached the bridge without a forward look-out to monitor the transit.

After lowering the vessel’s wheelhouse as the tow approached the CSX Railroad Bridge, the pilot’s visibility forward and over the tank barges was reduced.

In conjunction with the wheelhouse lowering, the pilot also shut off and lowered the radars, which eliminated his ability to obtain bearing and distance for collision avoidance, as well as to detect other vessels and Contact of Dewey R Tow with CSX Railroad Bridge Protection Cell 6 obstacles.

Additionally, his attention was fixated on a barge moored approximately 1,000 feet north of the bridge on the starboard side, which prompted him to maneuver the tow to port, out from the center of the channel before passing beneath the bridge in an effort to pass further away from the moored barge after clearing the bridge.

This heading change brought the head of the tow closer to the bridge’s south-side protection cell.

Although the pilot stated that the red light atop the protection was unlit, the same bulb was found post-accident to illuminate, and damage to the conduit for the electrical wiring for the light was likely caused by the barge striking the cell.

As he had done in the past, the pilot attempted to use the vessel’s spotlights that were mounted on the retractable wheelhouse to locate the protection cell of the CSX Railroad Bridge and use it as a visual aid to navigate through the span.

The use of the spotlights with the lowered wheelhouse reduced his visibility, rather than improving it, due to the glare reflecting off the light gray decks of the barges strung out ahead.

Additionally, at the time, there were several shiny surfaces reflecting light off the side of a train passing over the CSX Railroad Bridge, which adversely affected the pilot’s visibility from the wheelhouse and further distracted him.

The company’s TSMS manual included bridge transit procedures, but those procedures did not require look-outs to be posted at the head of the tow during bridge transits. Instead, it was at the discretion of the operator to post look-outs in “any situation deemed appropriate.”

The pilot’s approach to the bridge became more difficult due to:

The pilot had the option to post a crew member (look-out) at the head of the tow to monitor the passage. A crew member was available, but the pilot chose not to utilize him as a look-out.

A crew member posted at the head of the lead barge could have spotted the protection cell and communicated its location relative to the tow while the pilot focused on safely navigating through the bridge.

Operators should exercise extreme caution when maneuvering through bridges and should consider assigning additional personnel to perform look-out duties and monitor the transit. 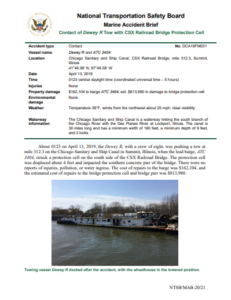