Both vessels shortly after the collision / Credit: USCG

NTSB issued an investigation report on the collision between the bulk carrier Century Queen and the towing vessel Kaytlin Marie on the Lower Mississippi River off Louisiana, in June 2019. The investigation highlighted lack of effective communications to confirm a passing arrangement as key cause of the collision.

​On 8 June 2019, about 1215 local time, the upbound bulk carrier Century Queen, with a crew of 21, and the downbound towing vessel Kaytlin Marie, with 7 crew members onboard, collided on the Lower Mississippi River at mile 126 near Hahnville, Louisiana, while transiting through a river bend.

The National Transportation Safety Board determines that the probable cause of the collision between the bulk carrier Century Queen and the towing vessel Kaytlin Marie was the lack of early and effective communications to confirm a passing arrangement between the two vessels.

About 0.5 mile astern of the Repentance, the Kaytlin Marie was also downbound and favored the left descending bank prior to the accident bend. However, the pilot chose to maneuver to the right descending bank while rounding the point.

The towboat started toward the point following the radio conversation between the Repentance and Century Queen. Per the rules, the Kaytlin Marie also had the right-of-way as the downbound vessel but, unlike the Repentance, did not contact the Century Queen to propose a manner of passing.

The Kaytlin Marie pilot told investigators he preferred to maintain the right descending bank to avoid the current on the opposite bank and that in his experience deep draft ships typically kept to the middle of the channel, avoiding the fleets of barges on the right descending bank. He also told investigators he did not call the Century Queen because it appeared to him that the ship was maintaining the center of the channel and that light boats did not normally call to make passing arrangements.

The Century Queen pilot incorrectly assumed the Kaytlin Marie would follow in the track of the Repentance. The NOBRA pilot told investigators he talked to the Kaytlin Marie 3–5 minutes before the incident, which would have been between 1210 and 1212. However, no conversation was heard in the review of either the VTS or VDR audio. The fact that the Kaytlin Marie was fineto-port and presenting a port bow aspect at 1213, when the Century Queen and Repentance passed each other, should have raised concern. Yet, the pilot did not contact the Kaytlin Marie, or indicate any doubt, as required by the Rules, for another 85 seconds to verify what, in his mind, would be a starboard-to-starboard passing. He told investigators it was not normal practice to call light boats.

The radio call to Kaytlin Marie at 1214:25 was the first indication to the Kaytlin Marie that the Century Queen anticipated a two-whistle passing. Unwilling to turn to port across the ship’s bow as requested, the pilot immediately made an evasive maneuver that brought it further to starboard. In his efforts to avoid the collision, however, he did not communicate this intention to the Century Queen. By not replying to the ship’s proposal or indicating his intention or inability to meet the request, the pilot aboard the bulker lacked information regarding the towboat’s intentions and came further to port, exacerbating the situation.

Assumptions by both vessels as to the intent of the other created a dangerous situation. As the downbound vessel, the Kaytlin Marie was obligated to propose the passing arrangement. Early communication by either vessel would have ensured what should have been a safe starboard-tostarboard passing within a half-mile-wide section of the river. The local custom of light boats not calling to propose passage when required, or others not calling light boats when in doubt, created a dangerous scenario.

When meeting or overtaking a vessel on the Western Rivers, especially within a bend where high-water conditions can increase the risk of collision, it is critical to establish early communications rather than make assumptions about the intentions of approaching vessels.

Rules of the Road must supersede local practices or habits, such as light boats and deep draft vessels typically not contacting each other. 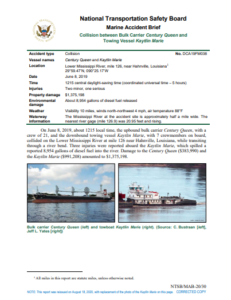