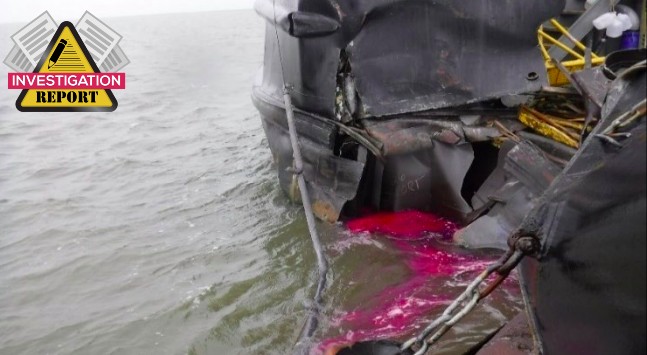 The port side of the Cheramie Bo Truc No 22, postcollision, showing the compromised no. 1 port fuel tank and oil spillage / Credit: USCG

NTSB issued an investigation report on the collision between an offshore supply vessel and an ATB in Sabine Pass Jetty Channel, Texas, in November 2019, identifying poor bridge resource management as a key safety issue.

On 14 November 2019, about 0415 local time, the offshore supply vessel Cheramie Bo Truc No 22 was outbound for sea transiting Sabine Pass with a crew of five, when it collided with the inbound articulated tug and barge (ATB) Mariya Moran/Texas, with a pilot and nine crew aboard, in the vicinity of Texas Point.

As a result, about 6,641 gallons of diesel oil were released, and the waterway was closed for 12 hours. There were no injuries. The Cheramie Bo Truc No 22, valued at $1.2 million, was declared a total loss. The Mariya Moran and Texas sustained $654,572 in damages.

Navigating in channels and harbors requires quicker reaction times due to traffic, currents encountered, and frequent course changes, and more rudder due to slower speeds.

Marine autopilots such as the one installed on the Cheramie Bo Truc No 22 hold a vessel’s heading but not a course.

Additionally, because marine autopilots have settings including gain and maximum rudder, they are not well-suited for the quicker reaction times and greater rudder often needed in channels and harbors. Therefore, autopilot use is often discouraged or prohibited in restricted waters. The manual for the Cheramie Bo Truc No 22’s autopilot specifically warned users not to use autopilot in a “harbor entrance or narrow channel.”

Despite this warning, the mate attempted to use the autopilot after getting underway on the accident voyage. As a result, he struggled to maintain a safe course during the first 12 minutes of the passage, nearly striking a stationary jack-up before returning to manual steering,

The Cheramie Bo Truc No 22 AB and engineer stated they had to correct the mate’s steering in the channel twice (before the turn in front of the ATB), but they did not summon the captain. They recognized the hazardous situation as the mate started the turn toward the ATB and again advised the mate to steer to port. The mate ignored their concern. They did not take further action despite the hazardous situation.

Meanwhile, the report notes that no VHF radio passing arrangement or maneuvering signals were made. despite both vessels being aware of each other.

All evidence shows that there was room to pass safely starboard to starboard had Cheramie Bo Truc No 22 continued parallel to and along the east edge of the channel after passing buoy 27, NTSB said. The Mariya Moran/Texas pilot assumed a starboard-to-starboard passing based on the position of the Cheramie Bo Truc No 22. Inland Navigation Rules require either a port-to-port passage or communication either by radio or whistle signal for an agreed-upon alternate passage between two vessels.

A radio call from the ATB prior to the pilot relieving the mate to confirm the offshore supply vessel’s intentions may have kept the Cheramie Bo Truc No 22 mate from steering across the ATB’s bow. After the turn to starboard across the bow of the ATB, the collision was unavoidable.

In addition, although investigation showed that the mate consumed alcohol sometime prior to the voyage, this does not demonstrate conclusively that he was impaired by alcohol. The regulatory limit for commercial mariners is 0.04 g/dL.

However, attempting to use the autopilot in a channel, nearly colliding with stationary jack-ups, weaving across the channel, ignoring the warnings from the on-watch AB and engineer in the wheelhouse, and suddenly turning in front of the ATB all indicate a degree of misjudgment, impairment, and/or incompetence.

–Teamwork: Safe and effective navigation is not one person’s job. Bridge resource management includes the concept of teamwork, which is an essential defense against human error.

A good team should anticipate dangerous situations and recognize the development of an error chain. If in doubt, team members should speak up or notify a higher authority. Vessel operators should train their crews on and enforce their safety policies.