Left: Damage to the Trinity’s starboard side from the impact of barge Kirby 29751. Right: Damaged shoreside cargo hose and deformed piping at the manifold at the Kinder Morgan facility / Credit : Kinder Morgan Pasadena Liquids Terminal

NTSB issued an investigation report on the collision of the towing vessel Dixie Vandal with the moored towing vessel Trinity and Tow in Houston Ship Channel, in March 2019, identifying fatigue as key cause.

At 0408 local time on 15 March 2019, the towing vessel Dixie Vandal, pushing a partially loaded fuel barge upbound through the Houston Ship Channel, struck the towing vessel Trinity and one of its barges, which were moored and preparing to discharge cargo at the Kinder Morgan Pasadena Liquids Terminal in Pasadena, Texas.

The contact caused the Trinity and its tow to shift about 100 feet upriver, breaking the cargo hoses and mooring lines and damaging the facility.

About a half-gallon of jet fuel discharged into the channel.

There were no injuries neither to the five crew aboard Dixie Vandal nor the four crew on Trinity.

The National Transportation Safety Board determines that the probable cause of the collision of the Dixie Vandal’s tow with the moored Trinity and tow was the fatigued pilot falling asleep near the end of his 12-hour watch while maneuvering in the Houston Ship Channel, resulting in the loss of control of the vessel.

Contributing to the pilot’s fatigue was the extended length of duty through the night and early morning hours and his use of an over-the-counter antihistamine.

The Dixie Vandal’s ECS playback displayed a course change to port about 04:07:30, a maximum rate of turn to port at 04:07:47, and a significant drop in speed at 04:08:35, indicating contact occurred between the vessels just over a minute after the course change.

The pilot did not recall making this sudden course change nor did he recall hearing the BNWAS alarm on the bridge; after the accident, he told investigators that he believed he had dozed off.

Based on testing of the crew five days before and after the incident, the system was likely operating as designed.

Fatigue has been a leading cause of accidents in the transportation industry. There is evidence that fatigue can adversely impact operator performance. Individuals vary in their requirements for sleep in a 24-hour period; however, cognitive function, alertness, and performance are all affected by a circadian process that is optimal on a “day-oriented” schedule.

Circadian troughs, or dips, occur when the body has a stronger desire to sleep, which typically occurs between the hours of 0100 and 0500, depending on individual factors.

Research has shown, and NTSB investigations have further highlighted, that fatigue-related accidents are more likely to occur at the end of the night or during very early morning hours.

The Dixie Vandal tow struck the Trinity at 0408, which, studies have concluded, is a time when the circadian rhythm is at a low. This dip in circadian rhythm often makes a person feel inclined to sleep, even when the person is not overly fatigued. Some effects of fatigue include lapses of attention, diminished decision-making ability, slowed responses, and an inability to concentrate.

Of the 14 marine accidents the NTSB has investigated between 2014 and 2019 in which fatigue was found to be a contributing factor, 10 accidents occurred between 0100 and 0600.

The watch schedule for the crew on the Dixie Vandal was 12 hours on and 12 hours off. The pilot had been awake for about 12 hours at the time of the accident and had been on watch for about 10 of those hours.

He reported to investigators that he did not feel fatigued that night, and the captain believed the pilot was “upbeat and well aware of what was going on” during his evaluation for watch readiness at 1800.

Company policy, which the captain seemingly supported, stated that if the pilot was feeling tired during his watch, he could have contacted the sleeping captain to assist or called the company to provide a relief, but he did not.

Self-reported (subjective) alertness, such as the pilot stating that he felt alert and awake for his shift, is often deceptive. Individuals are often not able to judge their own levels of fatigue.

Additionally, while the captain had evaluated the pilot for watch readiness, the accident took place 10 hours following that subjective evaluation; thus, that earlier evaluation was not indicative of his alertness before the collision.

Shift work adds more complexity to the circadian process, because individuals have a harder time acclimating when switching from a day shift (or in this case, off-duty) to a night shift, when a crewmember’s entire schedule is flipped from day to night.

Although the accident pilot had more than a week to adjust to the night shift, his work/rest schedule was shifted in direct opposition to what was considered “normal” for him (in this case, changing from staying awake during the day to sleeping at night) and his circadian process was likely affected, resulting in fatigue and thus reducing performance.

Companies should monitor the watch schedules of their crews to ensure that they are properly rested and afforded proper work/rest schedules.

Crewmembers should be encouraged to request assistance from other crewmembers if they feel fatigued.

Recently, AMSA issued guidelines to address fatigue for Australian and foreign flagged vessels. The guidelines are based on the IMO Guidelines on Fatigue (MSC.1/Circ. 1598.) and they seek to provide information on the causes, the consequences and the risks it poses. 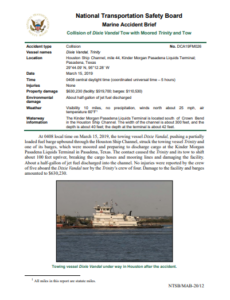