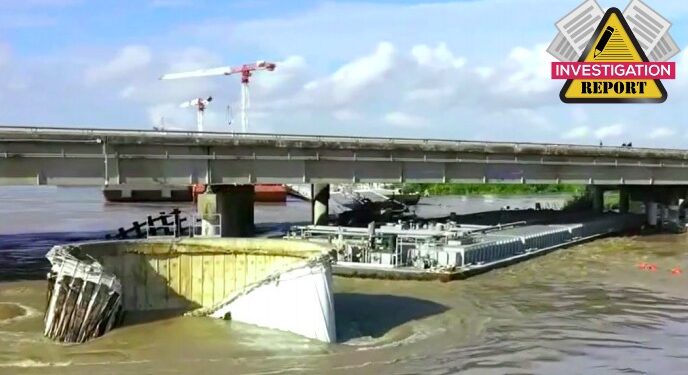 Barges CBC 193 and CBC 1403 resting against I-10 bridge pilings after striking and damaging a protective cell / Credit: KJRH-TV

NTSB issued an investigation report on the breakaway of a barge in the San Jacinto River, in September 2019. The incident, which caused more than 5 million damage, highlighted the need for companies to continuously evaluating their heavy weather plans.

​​On September 19, 2019, at 2338 local time, during historic floodwaters and high river current, 11 barges broke free from a San Jacinto River barge fleeting area just north of the Interstate 10 (I-10) bridge in Channelview, Texas, and 6 barges struck pier columns supporting the I-10 bridge.

There was neither pollution nor injuries. However, total damages, including repairs to the I-10 bridge ($5.11 million) and removal of and repairs to the barges ($350,000), exceeded $5.46 million.

​The National Transportation Safety Board determines that the probable cause of the barge breakaway and contact with the I-10 bridge was the force of the river current acting on the moored barges at the San Jacinto River Fleet, which exceeded the capacity of the mooring lines, due to the extreme rise and flow of water in the San Jacinto River from Lake Houston dam’s uncontrolled spillway release of water during a historic rainfall event. Contributing was the operating company not rearranging fleeting area tiers to mitigate the effect of current on barge tiers.​

Heavy rains led to historic floods, which, despite fully open Lake Houston dam gates, increased the water level in Lake Houston above the dam’s uncontrolled spillway, ultimately releasing the excess water to the San Jacinto River. The dam’s high discharge rate raised the river level and increased the current at the San Jacinto River Fleet 14 miles downriver, increasing the force acting on all the barges tied to tier 3. This force significantly strained the tier 3 moorings and caused the lines to part. After the accident, investigators found parted synthetic mooring lines attached to the pilings and dead men; the parted lines were believed to have been fastened to the empty tank barge IB1021.

It is likely that the strain was not distributed evenly among the lines due to the current, resulting in the mooring lines exceeding maximum load and parting. Once one line failed, the strain would have been placed on the next line, which would also have failed, until the breakaway occurred,

The blue steel 1-3/4-inch lines parted approximately 10–15 feet from the base of the dead men. The string of 11 barges stayed together after they broke away from tier 3, and they were sufficiently secured to each other with their respective mooring lines and wire ropes until the barges were separated by the crews in an attempt to transport two barges back to tier 2. The mooring points at tier 3 (three pilings and two dead men) placed large strains on the mooring lines closest to the pilings and dead men. Given the strong current, rapidly rising river level, and therefore dangerous conditions for personnel on tows and potentially on barges, there likely was no safe way to effectively keep the 11 barges moored to tier 3.

The Cheryl K Marine operations manager who oversaw the San Jacinto River Fleet area monitored weather conditions and periodically updated customers, but the San Jacinto River Fleet should have also implemented its severe weather plan and taken earlier action to break down the longer tiers and secure the vessels in the fleeting area. The company did not appear to follow their own SMS policies relating to severe weather and swift/flood water plans. Towing vessels were available had an order been given to break down tier 3.

Had the longer string of barges at the tier been broken down and barges more evenly distributed among the tiers, the resulting shorter strings would have been less vulnerable to swift currents. The forces on the barges’ mooring lines in tier 3 would have been lessened due to the lower number of barges acted on by the current.

The four towing vessels and crews worked tirelessly for hours attempting to control the barges; however, all four vessels combined were not able to succeed in rounding up the barges against the strong river currents experienced on the north side of the I-10 bridge.

Marine operating companies should develop and continuously evaluate severe weather plans to prepare for challenges accompanied by tropical storms and/or severe weather with the potential to cause flooding or swift water within their areas of operations. Severe weather can trigger prolonged periods of weather restrictions in navigable river watersheds and create challenging conditions due to high or swift water downstream.