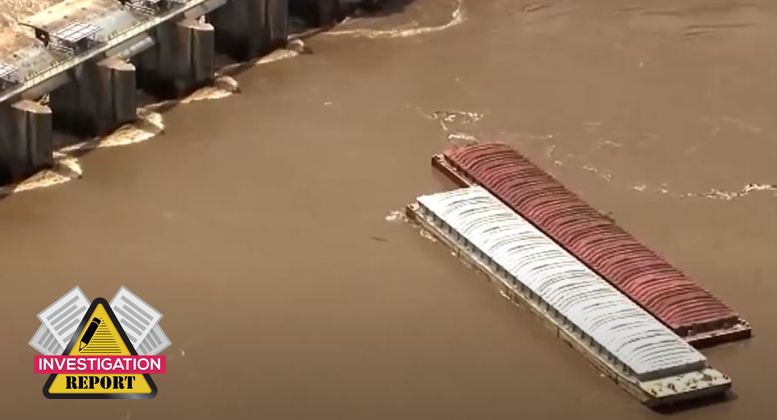 NTSB investigation: Barge breakaway due to force of river current

NTSB issued an investigation report on the barge breakaway and contact with Webbers Falls Dam on the Arkansas River, in May 2019. The barge breakaway was attributed to the force of the river current which exceeded the capacity of the mooring wires.

The barges had broken away the previous day from a fleeting area on the Grand River in Muskogee, Oklahoma, during historic flood waters and high river current.

The two barges were total constructive losses. No pollution was reported.

Total damages exceeded $4.7 million, including the amount spent to remove the barges and repair the dam ($3,956,249).

The National Transportation Safety Board determines that the probable cause of the barge breakaway and contact with the Webbers Falls Dam was the force of the river current acting on the moored vessels at the Grand River fleeting area, which exceeded the capacity of the mooring wires, due to the extreme rise and flow of water in the Grand River as the Fort Gibson dam released major amounts of water in a short period of time.

Heavy rains led to historic floods, which increased the water level in the area’s flood control reservoirs and forced a release of the excess water by the Corps of Engineers.

In the 26 hours after the Dennis Collins moored upriver with the four barges, water was released from the Fort Gibson Dam, causing the Grand River level to rise by at least 9 feet, and the flow rate (at the dam) to increase by 196,000 cfs.

At the time of the breakaway at 1213 on May 22, the nearby Muskogee gauge reported a level of 37.76 feet and a flow of 378,432 cfs, almost three times the initial flow present when the captain of the Dennis Collins decided to move the tow upriver, equating to a current of at least 6.8 mph. The rising water and increasing current increased the current load (force) acting on the barges.

This force significantly strained the fleet moorings of the LTD 11140, which were the only moorings holding the two barges, the Dennis Collins, and its tow to shore.

When the vessels broke free, the pilot and captain of the towing vessel Dennis Collins observed the upriver wire holding the LTD 11140 parting first and the other wires parting seconds later.

After the accident, investigators found parted cables attached to the mooring anchors.

It is likely that the strain was not distributed evenly between the three wires, resulting in one line taking a large portion, or all the load, if the others had become slack. Once one line failed, the strain would be placed on the next line with the least amount of slack, which would also fail, until the breakaway occurred. 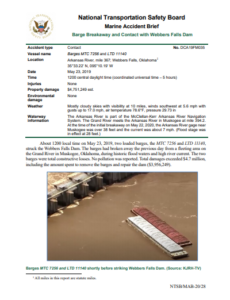