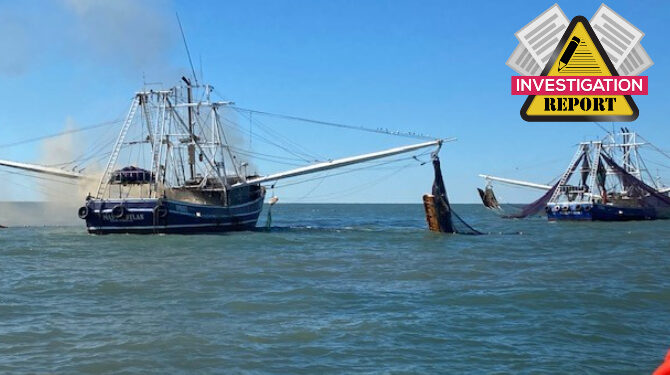 About 0745 on December 1, 2020, the fishing vessel Master Dylan was trawling for shrimp in the Gulf of Mexico when an explosion occurred in the engine room.

Namely, the crew of the vessel were trawling for shrimp when they reported hearing a “loud explosion” in the engine room, after which they saw fire and black smoke.

The captain attempted to extinguish the fire, but was unsuccessful. A nearby fishing vessel rescued the crew from the burning vessel. An offshore supply vessel eventually extinguished the fire using water cannons. Master Dustin II, a vessel owned by the same company, proceeded to tow the Master Dylan to the nearest point of land.

The Master Dylan ran aground during the tow and the fire re-flashed. The fire did not extinguish and eventually the Master Dylan rolled onto its starboard side and sank.

The NTSB determined the probable cause of the engine room fire was the catastrophic failure of a diesel generator. Contributing to the spread of the fire was the location of the fuel shutoff valves within the engine room, which prevented the crew from securing them.

In light of the incident, no injuries were reported, while the fire resulted in the total loss of the $300,000 vessel.

​Following the initiation of an engine room fire, it is imperative to remove the source of available fuel to the fire found in the fuel oil and lube oil systems. In this accident, the vessel had no remote emergency cut-off valves outside the engine room, and thus fuel to the firecould not be stopped and the vessel was eventually consumed by the flames. Vessel designers, builders, owners, and operators are encouraged to install, regularly test, and have emergency drills that incorporate remote cut-off valves for fuel and lube oil lines.