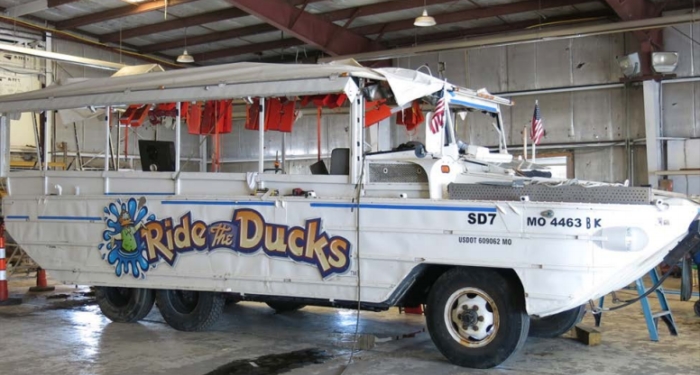 Based on fatal incident of the DUKW Amphibious Vessel, Stretch Duck 7, the National Transportation Safety Board (NTSB) issued Marine Safety Recommendation Report, following a preliminary report that has already launched, calling the USCG to require sufficient buoyancy for DUKW amphibious passenger vessels and to require the removal of canopies, side curtains and their associated framing, while underway, for those without sufficient reserve buoyancy.

On the evening of July 19, 2018, 17 of the 31 persons aboard the Stretch Duck 7 died when the amphibious passenger vessel (APV) sank during a high-wind storm that developed rapidly on Table Rock Lake near Branson, Missouri. The vessel was originally built in 1944 as a DUKW landing craft to carry military personnel and cargo during World War II and was then modified for commercial purposes to carry passengers on excursion tours.

Prior to the accident, the National Weather Service had issued a severe thunderstorm warning for the area advising of wind gusts of 60 mph. In light of the weather forecast, the manager-on-duty advised the captain, prior to departing, to complete the lake portion of the tour before the land tour, which normally occurred first, due to the approaching weather.

At the same time, another vessel from the company, Stretch Duck 54, was also conducting a lake tour, but managed to exit the water after seeing the severe weather.

Yet, the Stretch Duck 7 was not able to exit the water, taking on water and sinking approximately 250 feet away from the exit ramp.

Due to the fact that amphibious vessels are vulnerable to rapid sinking because they lack reserve buoyancy, the Safety Board had already -from the past- issued specific recommendations to boost safety measures of the use of this type of vessels.

Accordingly the NTSB had proceeded to two recommendations:

The above safety issues were identified almost 20 years prior to the sinking of the Stretch Duck 7 and remain relevant to this accident. The 1999 sinking of the Miss Majestic, another accident involving a DUKW amphibious passenger vessel that resulted in multiple fatalities, prompted the NTSB to issue several recommendations addressing these and other safety concerns.

NTSB has already investigated a number of incidents of DUKW Amphibious vessels that are commercially used. Since 1999, the NTSB has issued 22 safety recommendations related to modified WWII DUKW amphibious passenger vessels.

At the time of the Stretch Duck 7 sinking, nine of these safety recommendations had been classified “Closed—Acceptable Action,” “Closed—Acceptable Alternate Action,” or “Closed—Exceeds Recommended Action,” indicating the completion of a response that either complied with, met the objective of, or surpassed what the NTSB recommended, respectively

Four remained pending and were classified “Open—Acceptable Response,” indicating a planned action that, when completed, would comply with the safety recommendations

The NTSB believes that the failure to implement the safety recommendations related to providing reserve buoyancy for DUKW amphibious passenger vessels contributed to the sinking of the Stretch Duck 7 on Table Rock Lake on July 19, 2018.

# NTSB’s Recommendations to the US Coast Guard #

Require DUKW amphibious passenger vessels (commonly referred to as original and/or “stretch” DUKWs) to have sufficient reserve buoyancy through passive means, so that they remain upright and afloat with a full complement of passengers and crewmembers in the event of damage or flooding.

For DUKW amphibious passenger vessels without sufficient reserve buoyancy (commonly referred to as original and/or “stretch” DUKWs), require the removal of canopies, side curtains, and their associated framing during waterborne operations to improve emergency egress in the event of sinking.

To explore more on the accident report, click on the PDF herebelow 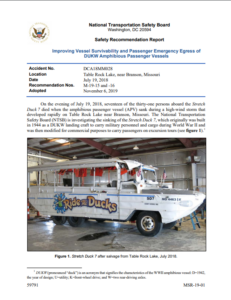