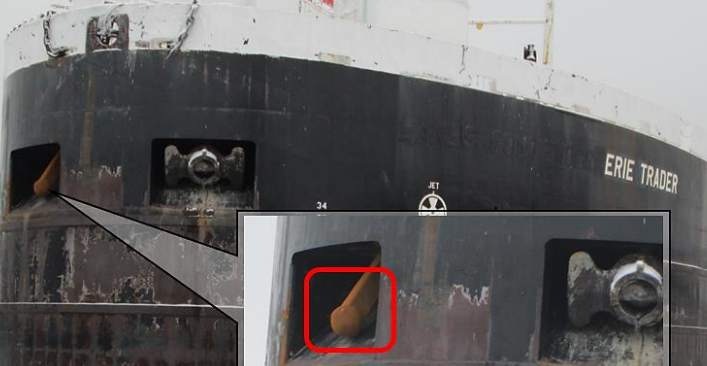 The US National Transportation Safety Board (NTSB) issued an investigation report on the anchor contact of the Articulated Tug and Barge 'Clyde S VanEnkevort/ Erie Trader' with underwater pipelines which resulted in an oil spill and significant damage.

At 1732 local time on 1 April 2018, the articulated tug and barge (ATB) Clyde S VanEnkevort/ Erie Trader was westbound with a crew of 14 in the Straits of Mackinac, Michigan, when the barge’s starboard anchor, which had unknowingly released and was dragging on the bottom, struck and damaged three underwater electrical transmission cables and two oil pipelines.

About 800 gallons of dielectric mineral oil leaked into the water from the cables. The oil pipelines sustained only superficial damage.

Repair and replacement of the cables was estimated at more than $100 million. No injuries were reported.

-->During the accident voyage, the anchors were first ordered cleared when the vessel passed Gros Cap Reef. Neither of the two ABs on board, who were responsible for clearing and securing the anchors, stated that they cleared the starboard anchor.

-->Although the second mate said he ordered the anchors secured when departing De Tour Reef, the AB on watch at the time stated he did not actually secure the starboard anchor despite communicating to the wheelhouse that all anchors were secured. Due to conflicting statements and lack of definitive information, it could not be determined when the starboard anchor was last cleared.

-->On the afternoon of the accident, no crew worked the deck of the barge after the on-watch AB was released from his lookout- and anchor-detail duties on the bow.

-->Based on the friction contact pattern on the upper liner, it is likely that the chief engineer and crew who replaced the top liner did not properly adjust the brake band. The brake band liner and hardware were replaced without the training, supervision, or instructions to properly carry out the task and ensure appropriate adjustments. Aside from the improperly adjusted band, investigators found no other defects in the anchor assembly.

Although anchor windlass brakes are not intended to hold an anchor and chain indefinitely during the dynamic conditions that vessels typically encounter on voyages, a properly adjusted brake should have had ample holding capacity for the weight of the Erie Trader’s anchor and chain.

-->The procedure used in testing the starboard anchor windlass brake after the shipyard replacement was inadequate for determining the brake’s full functionality. The starboard anchor was lowered only the short distance down to the ice. Additionally, the installation and parts manual on board the vessel did not define any test procedure or any type of planned maintenance for checking the anchor windlass brake; therefore, the chief engineer and crew did not have adequate documents to properly repair or test the windlass brake.

-->At the time of the accident, VanEnkevort Tug & Barge was implementing a towing safety management system (TSMS) to comply with new regulations for towing vessels. Although in progress, the system had not yet been fully implemented with compliance verification.

There were no policies and procedures related to anchor operations, checklists, planned and unplanned maintenance, and reporting of equipment deficiencies and corrective actions, and safety measures to place defective equipment out of service. 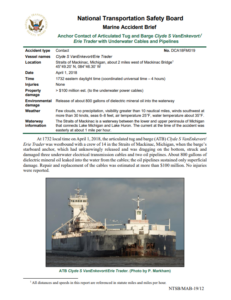