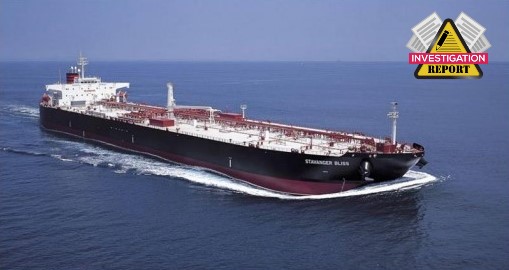 The Norwegian Safety Investigation Authority, published its report on the 25 October 2020 incident, when the captain of the oil tanker ‘Stavanger Bliss’ died when he entered a cargo tank that had not been cleared for entry.

In the days following 26 October, ‘Stavanger Bliss’ was on its way from Dalian to the anchorage at OPL Yeosu. The captain had asked the pumpman on board to measure the relevant tanks at regular intervals to check their ROB status.

On Thursday 5 November 2020, the tanker had anchored at OPL Yeosu in South Korea. It was in ballast condition awaiting the signal to load. The 3rd officer and a junior officer were working the bridge watch.

At 07:50, the chief officer held a morning meeting with the deck crew, at which the day’s work plans and control measures were reviewed. The tasks discussed were preparations for the next loading operation and general lubrication work.

At 08:57, the captain said to the junior officer on the bridge in their mother tongue, which was Russian, that he had observed zero ROB in the last port of discharge. However, as a result of the subsequent report of a huge amount of ROB, he went on to say, ‘it doesn’t look very good’ and that ‘there is too much ROB’. The captain also said that ‘we missed something in the cargo heating’.

Earlier that morning, the captain and the chief officer had been in the cargo control room where they had discussed remaining cargo in the tanks with the pumpman, and the captain had said that he would like to enter the tanks to check. The captain initially wanted to open the number 3 starboard tank, but since it proved difficult to open, he wanted the number 2 port cargo tank opened instead.

At 09:41, the 3rd officer commented to the junior officer on the bridge; ‘I can see that they’re preparing to enter the tank. He [the captain] won’t listen’.

The captain turned to the bosun and asked him to also open the hatch to the number 1 starboard cargo tank. The pumpman was in the pump room servicing the oil discharge monitoring equipment (ODME). At 10:40, the bosun observed the captain near the number 2 port cargo tank wearing a self-contained breathing apparatus (SCBA).

The bosun and the ordinary seaman ran over to the number 2 port cargo tank. Based on the company’s internal tank entry procedures and the pertaining Stop-Work-Authority (SWA) policy, the bosun asked the captain to stop and to not enter the tank. The captain nonetheless entered the cargo tank at 10:41.

At 10:48, the bosun communicated with the captain on his handheld UHF radio while he was inside the tank to check how the captain was doing. At 10:58, the pumpman asked the chief officer on his UHF radio to come to the number 2 port cargo tank and told him that 18 minutes had passed since the captain entered the tank. According to the chief officer, his UHF radio had been set on low volume while he was in the cargo control room and he had not registered the whole of the first call due to excessive background noise. The chief officer then turned up the volume on his UHF radio and called up the pumpman. The pumpman told him that 18 minutes had passed since the captain had entered the tank, and that the crew members were very concerned because they were unable to establish contact with him.

At 11:00, the junior officer notified the 3rd officer on the bridge that the captain had told him on his UHF radio that he had started exiting the tank.

At 11:01, the chief engineer arrived on the bridge, and the junior officer informed him that the captain was down in the tank. The chief engineer then said, ‘but there’s inert gas in the tank’ and asked if approval had been obtained from the management company.

At 11:02, the chief officer was informed by a member of the crew that they had called the captain to ask him to exit the tank, but that he had not answered. The chief officer immediately went to the number 2 port cargo tank and, at 11:03, after becoming aware of the situation, declared an emergency. At 11:06, the ‘emergency situation’ was announced on the public announcement (PA) system from the bridge.

At approximately 11:15, rescue team 1 (3rd officer and able seaman) entered the tank wearing breathing apparatus and found the captain unconscious on his back on platform 2. The captain’s face mask had come loose, and they could detect no pulse or breathing.

On board the vessel, the captain wanted the pumpman to regularly sound the relevant tanks to check for any remaining cargo. The NSIA has not received information clarifying why the captain wanted such measurements to be taken. This was probably because the tanks had not been sounded by an independent surveyor for any remaining cargo after they had concluded unloading at the terminal in Dalian, and that the captain was therefore keen to determine the actual status before the surveyors should come on board to perform their measurements.

When the captain entered the tank, the bosun attempted to prevent him by using the company’s established Stop Work Authority (SWA) policy. The captain did not respond to this and probably intended to gain an overview of the situation in the tanks for himself following the ROB claim reported in connection with the remaining cargo.

When the captain entered the tank, the oxygen level was very low and there were toxic gases in the atmosphere. The captain was found with the breathing apparatus mask off, and according to the post-mortem the cause of death was coronary infarct. However, since the post-mortem examination of the captain provides no information about the COHb10 value, it cannot be concluded with certainty that the coronary infarct was due to carbon monoxide poisoning.

The management company had established tank entry procedures, which clearly set out that entering tanks with an unsafe atmosphere was not permitted. It is unclear why the captain nonetheless decided to enter the tank. He probably intended to gain an overview of the situation in the tank as a result of the ROB claim reported in connection with remaining cargo after the last unloading operation.

In addition, according to NSIA: