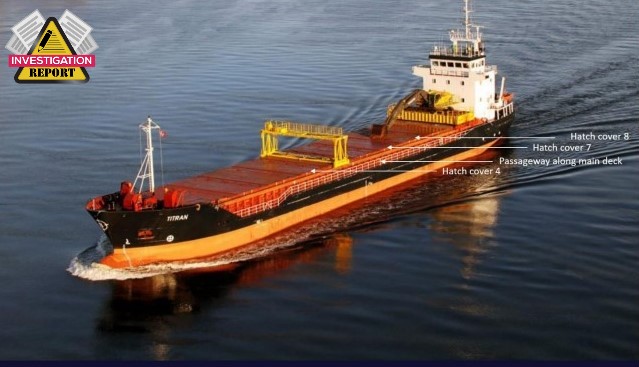 The Norwegian Safety Investigation Authority (NSIA) published its report on the very serious accident regarding a fall overboard from the cargo ship Titran, that took place east of Stigen in Lurøy municipality, on 6 March 2022.

On Thursday 4 March, the cargo carrier ‘MV Titran’ left the port of Florø, setting course for Halsa in Meløy municipality to unload fishmeal at one of Ewos’s factories. On Sunday 6 March, as the vessel started nearing Halsa, the deck crew started routine preparations for unloading cargo on arrival. The vessel was passing through inshore waters, and the wind and wave conditions were calm.

At 10:43, three members of the deck crew went to the port side together to commence the work.

At approximately 10:57, one of the able seamen moved along the passageway on the starboard side of the main deck to start loosening cleats. The cleats holding the aft hatches had already been loosened earlier that morning, on both the starboard and port side. Around the same time, another able seaman and the deck cadet (hereafter referred to as the cadet) started loosening the sea fastening for the excavator.

The cadet loosened the port strap which was attached to the excavator bucket and placed it on the hatch deck. He then moved towards the port side, intending to climb down to deck level by cargo hatch 8. A CCTV2 recording from the ship shows that the cadet first climbed down onto the rail track, placing his right arm on the hatch deck for support. He then brought his left foot down, closer to the railings, but his foot slipped and he fell across the railings and overboard at approximately 11:00. None of the crew witnessed the fall. One of the able seamen was behind the excavator, and the other was on the starboard side of the main deck loosening cleats by hatch 4.

He then reported to the captain that they could not find the cadet. Some of the crew were instructed to watch the water, while others continued to search on board the vessel.

At 11:22, the captain made a sharp turn to port, turning the vessel 180 degrees; see Figure 6. The captain then ordered the chief mate and deck officer to ready the MOB boat, so that it could be lowered quickly should the need arise.

According to the deck log, the captain notified the Norwegian Coastal Radio North (KRN) of a man overboard accident at 11:30. The radio station then transmitted a ‘mayday relay’.

#1 Traffic on the hatch deck

The shipping company had introduced MOB procedures that included a scenario in which the time of the fall is unknown. Among other things, it highlighted the importance of searching for the missing person in the right area, as time is an essential factor for survivability in cold water. The procedure did not specify how the crew was supposed to pinpoint the exact time of the fall. It has subsequently emerged that CCTV was an important aid in determining the time at which the missing person fell overboard. CCTV should not be introduced as a safety measure to replace other measures, but may be used in an emergency situation to gain a better understanding of and more accurate information about the situation.

The NSIA considers that the way the deck was designed, with a short distance from the outer edge of the cargo hatches to the railings at a considerably lower level was inexpedient in relation to the work to be performed and that it entailed a risk of falling overboard.

Furthermore, the investigation has shown that the crew’s use of this ’shortcut’ was a well-known practice. The NSIA considers it unfortunate that the design enables crew to move up and down on the hatches using the track and railings.

The incident happened as the deck crew were loosening cleats and other sea fastening to prepare the vessel for unloading in the next port. The cadet, who had loosened the excavator’ sea fastening, was moving down to the main deck via the rail track and railings when he lost his footing on the railings and fell overboard.

The crew and shipping company both considered readying the vessel for unloading a routine operation that did not require a risk assessment. Risk reduction measures had therefore not been considered or identified for this type of operation. No special safety measures had been introduced to prevent crew members falling overboard from the hatch deck, nor had sufficient measures been taken to reduce the consequences of falling overboard.

The risk associated with routine tasks becomes normalised in the individual over time, resulting in the risk gradually being ignored or not perceived. Shipping companies and other stakeholders must therefore consider the need for risk assessments and safe job analyses in all areas of operation that may entail risk, including those defined as routine operations.

What is more, the investigation found that: