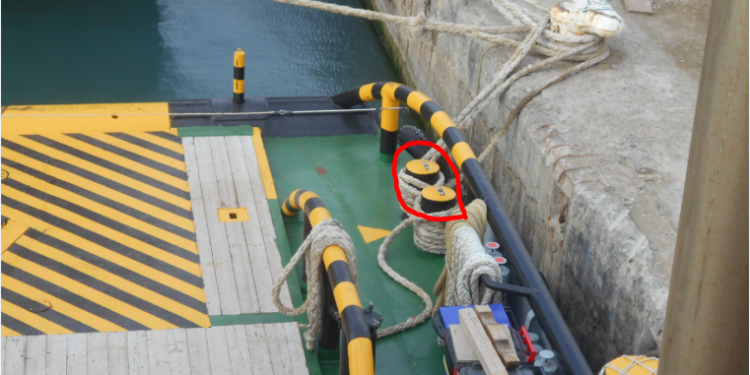 In its January issue of ‘Safety Flashes’ summarizing key safety incidents and lessons learned, IMCA describes an injury case of an AB after falling into the water during mooring operations. This was a high potential near miss incident which could have been avoided if assistance was requested by the vessel Master from onshore, IMCA noted.

During mooring, the AB jumped from the vessel to the quayside to receive the mooring ropes. In doing so, he slipped over the bulwark and fell over the side into the sea from a height of 1.75m. At that time, the gap between the vessel and the quay was 0.5-0.6m.

While falling, he managed to grab the vessel fender with his hands, keeping the upper part of the body out of the water. The vessel Master had a direct line of sight to the incident; he immediately stopped the engines and manoeuvred the stern away from the quayside using the bow thruster. This prevented the AB from being crushed between the vessel and quayside as well as from being drawn into the propeller.

He was helped back onto deck by a colleague and after a check-up it was confirmed that he appeared to be unharmed. Nevertheless, he was sent to a medical facility on the same day for proper examination which verified his fitness for work.

IMCA cited the following safety violations as the key causes of the accident:

The incident could easily have resulted in a fatality, while it could have been avoided if assistance was requested by the vessel Master from onshore. IMCA sees this incident as another reminder that shortcuts and deviations from established procedures and safe working practices are not acceptable.