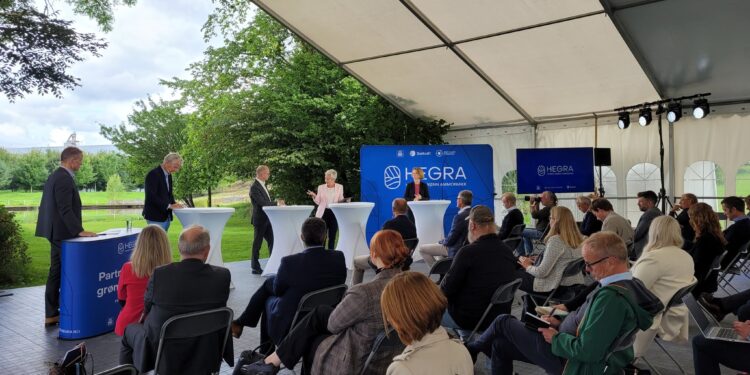 Officially launched on 16 August, the company was named «HEGRA» as a short for HErøya GReen Ammonia and reflects the onwers’ ambition of creating new industry in Norway that provides a competitive advantage in a growing global hydrogen economy, establishes green jobs for the future and forms the basis for a future Norwegian export industry, according to CEOs Svein Tore Holsether, Øyvind Eriksen and Christian Rynning-Tønnesen in Yara, Aker and Statkraft, respectively.

HEGRA is more than a new industrial company, it is Norway’s largest climate initiative. The decarbonization project will reduce CO2-emissions by 800,000 tonnes annually, equivalent to 300,000 fossil-fueled cars. It marks the beginning of developing a Norwegian value chain for green ammonia and hydrogen,

Among others, the new company aims to help create a new industry based on a regional hydrogen and ammonia market, whilst ensuring the survival and competitiveness of the Norwegian maritime and processing industries. It also seeks to help secure the 100,000 jobs in maritime and processing industries in Norway, as well as to create jobs in new supply chains.

We are thrilled to announce the official launch of HEGRA. 📰 Along with @Statkraft and #AkerCleanHydrogen, #HEGRA aims to electrify and #decarbonize the ammonia plant at #Herøya, enabling large-scale #GreenAmmonia production. ♻️ Learn more! 👉 https://t.co/X62JjMs68l pic.twitter.com/ThRctj69u5

Meanwhile, the move is in line with the Norwegian maritime industry plan to cut their emissions in half by 2030, and access to emission-free fuel will be key to reach this goal.

HEGRA is geared specifically at meeting the ambition of the European Commission’s «Fit for 55» package, which aims to reduce EU emissions by 55% by 2030. HEGRA will give Norway a competitive advantage within renewable energy and hydrogen and put Norway in a great position to reach climate ambitions,

Provided that power is available at site and the required public co-funding is in place, the project could be realized already 5-7 years from now.