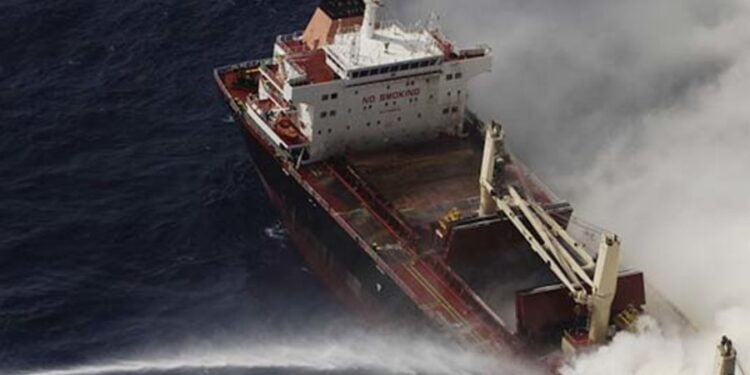 British shipping company Bibby Transport and Singapore-based operator J. Lauritzen have been ordered to pay compensation and costs totalling around US$30m after an accident in 2017, in which an Isle of Man-flagged ship and its fertiliser cargo were destroyed.

Namely, the Norwegian Court of Appeal ruled that crew negligence was a key factor in the loss of the 57,000dwt bulk carrier Cheshire and it upheld a claim for compensation by the cargo owner, Yara Fertilizer.

It also dismissed counter-claims from Bibby and Lauritzen alleging that Yara had provided insufficient information about the risks of the cargo.

The 22 seafarers and one cargo surveyor onboard Cheshire were forced to evacuate the vessel off the Canary Islands when decomposition of the ammonium nitrate-based NPK artificial fertiliser resulted in an explosion and the release of toxic gases.

Cheshire had loaded the 42,654-tonne cargo in the Norwegian port of Herøya and was four days into a voyage to Thailand when crew members noticed accumulations of water and declining oxygen levels in one of the holds. When the ship reported a rise in the temperature in another hold, the crew were warned that a decomposition event was probably taking place and they were given advice on how to handle it.

However, Nautilus notes that after initial signs of success the efforts to cool the cargo proved unsuccessful and the ship had to be evacuated nine days after it had left Norway. Almost all the cargo was destroyed, and the ship was declared a total loss.

Ruling that Bibby and Lauritzen were liable to pay damages, the court said it had found evidence of a ‘negligent breach of clear and repeated instructions’ by the ship’s crew, who had failed to ensure that all heat sources in the cargo holds were disconnected before loading.

The judgment further states that a light by a ladder in cargo hold 4 had probably been left on from the time of loading and, most likely, had not been disconnected until four days after that,– by which time the heat around the lamp had started the chemical reaction.

The instructions were to disconnect the power supply, not just to turn off the switches. That such disconnection probably only took place after four days is in itself clearly reprehensible

the court pointed out.

The court also decided that the crew were negligent in failing to act more quickly when the first signs of problems with the cargo had been detected.

Had the crew acted with reasonable speed, the extent of the damage would probably have been significantly less

Judges dismissed evidence from an expert witness called by Bibby Transport, who had argued that because the cargo was classified as ‘non-hazardous’ it was less important that the instructions for disconnecting all heat sources before loading were followed.

Moreover, the judges rejected Bibby’s claims that Yara had not given the crew sufficient advice about the cargo’s potential of self-sustaining decomposition and of the early signs of decomposition.

Bibby had also argued that Yara had failed to provide safety equipment such as Victor launchers.

Nevertheless, the court determined that the Cheshire’s master and Bibby Transport had ‘received sufficient information about the properties and the potential for damage to the fertiliser to understand the importance of taking care of relevant safety measures.’