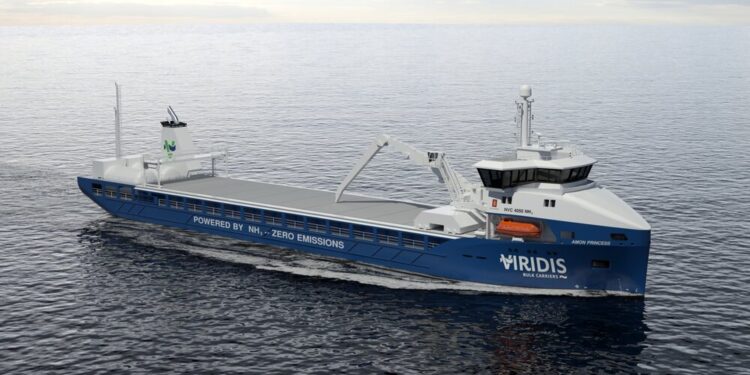 Amon Maritime has collaborated with Navigare Logistics and Mosvolds Rederi, to create a zero emissions dry bulk shipping company, with an ammonia-fueled fleet.

The company, which is called Viridis Bulk Carriers, will offer short sea bulk transportation without CO2 emissions. The first ships are scheduled for 2024.

Viridis has received project support for its ammonia-powered design from the Norwegian government. The aim is to have the first ships delivered in 2024, which will be able to steam over 3,000 nautical miles between bunkering.

Commenting on the collaboration, Espen Nordstrøm, managing director at Navigare Logistics, said that the FlexBulk project’s target is to build a carbon free bulk logistics network, served by a new fleet of ammonia-powered vessels.

UK: DNV to demonstrate safe use of pipelines to transport 100% hydrogen

IMO works to develop guidelines for use of ammonia and hydrogen

What is more, commenting on what the strategy of the new joint venture is, Jan Sigurd Vigmostad, chief investment officer at Glastad Holding and Mosvolds Rederi, noted that the aim is to meet the demand by replacing the aged fleet with zero emission ships.

Ammonia, a zero-carbon fuel is relatively easy to store and handle, and is attracting worldwide attention along with hydrogen, as a next-generation energy source with the potential to account for more than half of new ships using clean fuel after 2050. The big advantage of ammonia is that it can be stored in higher temperatures in a liquid form under atmospheric pressure.

Recently, a new report by Korean Register found that ammonia as a ship fuel presents additional risks when compared to conventional liquid fuels such as LNG, LPG, and methyl/ethyl alcohol, but it is possible to lower these risks by developing alternative and additional requirements to the existing IGC Code.