Although global offshore exploration activity has been flat year-to-date, the number of wells drilled in the Norwegian Continental Shelf (NCS) could challenge all-time high levels by the end of the year, says energy research firm Rystad Energy.

Rystad Energy expects that this high activity level will be sustained through the winter season and into 2020. Around 30 to 50 exploration wells will be drilled per year towards 2023.

Our preliminary analysis shows that a total of 130 wells are likely to be drilled this year – a 16% increase compared to 2018. The increased activity this year relates primarily to an uptick in exploration drilling, a segment that will see around 55 wells completed. This brings activity levels in line with the record pace last seen in 2013 and 2015, before the effects of the oil price collapse took hold on the drilling market in Norway,

Subsea development wells are forecast to experience a growth spurt beginning in 2020 and lasting several years. 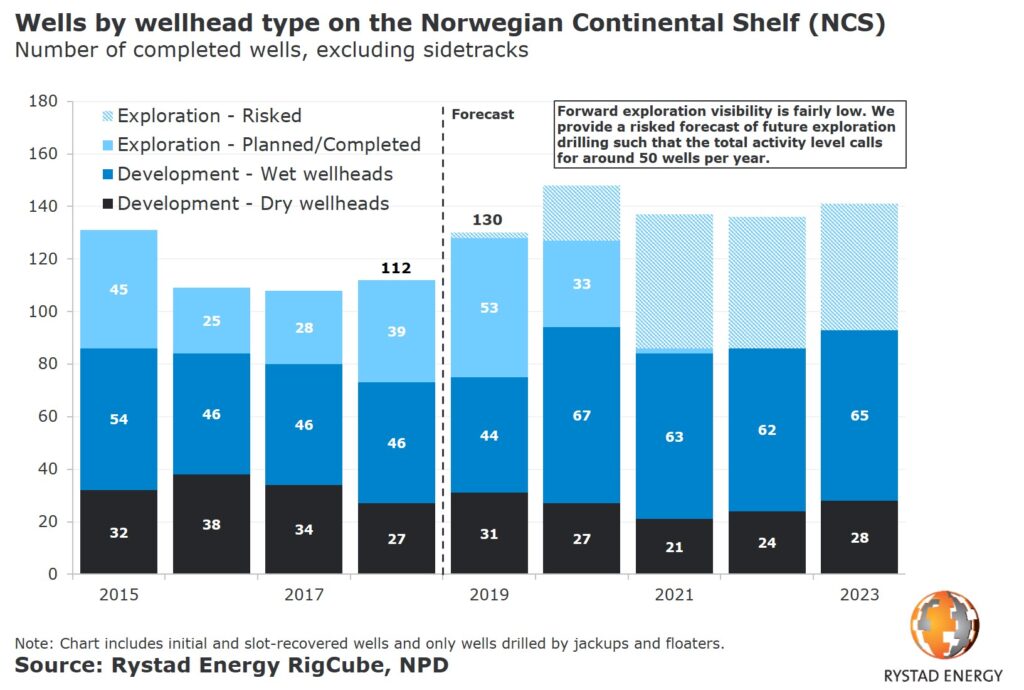 While offshore drilling share prices have fallen sharply over the past year, rig rates and utilization rates are on the rise, Rystad says.

On the NCS, average day rates now hover around $300,000 per day for floaters, up 76% since they bottomed out during the oil and gas downturn.

The offshore rig market is propelled by the increased sanctioning of greenfield projects, coupled with a substantial amount of brownfield work aimed at maintaining legacy production. Some E&P companies are even increasing exploration efforts in a quest to replace declining reserves, resulting in a ‘trickle-down’ effect that is driving up rig counts and day rates,

In the last five years, the annual exploration well count in Norway remains stable at 21-22% since 2016, yet down from 39% in 2014, according to Westwood Global Energy Group.