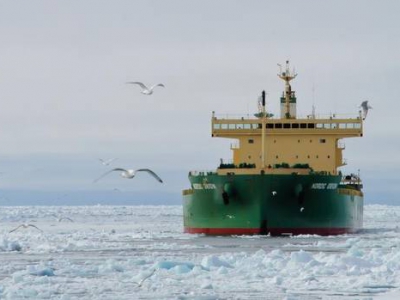 Nordic Orion sails from Vancouver to Finland in a historic transit

The international shipping industry is these days witness to a historic event, when a vessel for the first time ever is sailing from Vancouver in Canada to Finland through Arctic waters. The bulk carrier MV Nordic Orion is using the North West Passage as a transit trade lane, when transporting coal from Vancouver in Canada to Finland. The historic transit is shorter than traditional shipping routes and will not only save time, fuel and CO2, but also increase the load of cargo with 25% compared to the Panama Canal.

With its ice cover changing and a bulk carrier set out to conquer it, the Northwest Passage is becoming a potentialviable route for commercial traffic. MV Nordic Orion will carry a cargo of 73,500 tons of coal via the so called North West Passage, through Arctic waters to Finland, which could make it the first commercial bulk carrier to traverse the route since the SS Manhattan broke through in 1969.

The two-year-old vessel left Vancouver on September 6 on a route planned with the Canadian authorities and coastguard. MV Nordic Orion is one of the world’s few modern ice-class bulk carriers, managed bySeamar Management S.A, based in Athens, Greece.

For some routes, the Northwest Passage can save up to 7,000 kilometres and thats not just a distance savings, thats a savings in terms of fuel, time and salaries, said Michael Byers, an international law expert at the University of British Columbia, according to Global and Mail.

The North West Passage across the Arctic is shorter than the traditional route through the Panama Canal and thereby has the potential to generate important saving in both time, fuel and CO2 emissions. Christian Bonfils, from Nordic Bulk Carriers A/S, explains “The North West Passage shortens the distance with 1.000 nautical miles. This results in a reduction in fuel consumption and transportation time – and it also means lower CO2 emissions. The fuel savings alone add up to approximately USD 80,000.”

In addition this new route allows full utilisation of the ships capacity and thereby carries 25% more cargo than through the Panama Canal.

It takes more than an average ship to sail the North West Passage. The trip across the Arctic is a challenging task that requires great experience, navigational skills and modern world class ships. In fact, there are only a few vessels which can handle the task.

It is estimated that the North West Passage, which can be viewed in the picture below, will be open for transit voyages for approximately two months per year depending on the weather and ice conditions.

Image Source: The Global and Mail