Non compliance with COLREGs could lead to collision 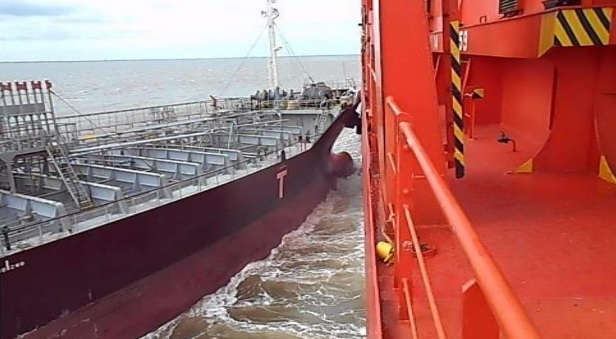 Above image is used for illustration purposes only.

In it’s latest issue, CHIRP focuses on two vessels’s crossing situation, while approaching a major port, as one of them didn’t follow the 15th rule of Collision Regulations. With a CPA of less than 0.25nm between the vessels, the report describes the whole procedure that each ship made and the actions taken, in order to avoid an incident.

In this report, CHIRP received a message about two powered-driven vessels passing through a crossing situation. Specifically, the vessel (A) was proceeding westerly at 11kts with the other vessel (B) proceeding WNW at 11kts to the south and just forward of the beam.

Both of the ships immediately informed the Vessel Traffic Service, mentioning their actions, while they were in a ship to ship communication on VHF Channel 12. The reporter in this instance was the chief of the stand on vessel.

As the TCPA approached ten minutes with a CPA of less than 0.25nm, I contacted vessel (B) on Channel 12 and asked his intention – he suggested that I alter course to port. I told him I would not be doing that and intended to halt the conversation there and abide by the regulations. Vessel (B) then questioned why I wouldn’t alter to port and under which Rule, which concerned me slightly

Moments later, the chief contacted the VTS and they advised him to make a bridge to bridge communication with the vessel (B). Then the vessel (A) limited its speed, avoiding the close quarters circumstances and risk of collision, giving the opportunity to vessel (B) to pass well ahead.

Rule 15 situations involving converging courses with a risk of collision seem too often to result in the give way vessel being reluctant to meet her obligations. This is something I regularly find working in the Dover Strait and English Channel

The reporter also stated that the non taking actions of the give way vessel in crossing situations, it is a rarely seen phenomenon, while he hopes that the publication of the incident will raise awareness of the issue and will give the matter great attention.

In light of this report, CHIRP comments: