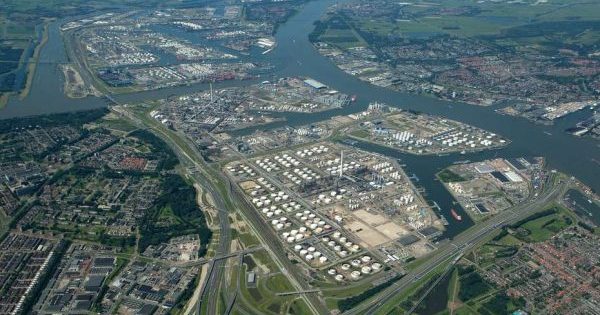 J. (Rob) Witte,  DGMR advised how to reduce  ‘’Noise in Ports’’ during the 2016 GREEN4SEA Conference & Awards.  He explained that moored seagoing vessels produce sound that can be perceived as annoying by residents living near harbours. The number of complaints in the Rotterdam Port Area is on average 250/year on this subject.

Sometimes ships cause large noise problems. We are not talking about loading and unloading noise but about auxiliary engines and funnel noise which sometimes has very loud and very low frequencies; it will travel through the windows right in the houses and people cannot sleep and start complaining. It is not common but it has happened over in Rotterdam, in Vancouver and in Great Britain. As a solution, you can take down the funnel and put a proper silencer inside, of course that is not the very big problem if you do it at the start of the building of the ship, but then again that does not always work. Sometimes we have low frequency components and that’s below 100 Hz, one can hear it very far away and when housing isolation is poor the sound will travel through your window and will cause a lot of annoyance. Regarding solution, do it right when you start building because afterwards it will cost a lot of money.

In Rotterdam port area, we generally have 250 complaints per year and only last year there were 1,400 complaints; people get worn out with this problem and start phoning. Failing mufflers on aggregates and compressors and sometimes even public address systems on ships may all constitute considerable noise sources. The port of Rotterdam and Amsterdam face a problem with noise coming from ships - they cannot regulate it because it is foreign territory and there are no rules. As DGMR, we have done a lot of measurements on ships and have created for several types of ships noise sound power levels depending on the deadweight tonnage. I have calculated the noise impact of ships at the Westpoort port and it can be said that the ship noise is the major part of the industrial noise that comes out of this area, so this is a problem for a port once it has a good relationship with the surrounding area and people living over there complain.

The ESPO ranking noise is quite an important subject; it was number 9 in 2009 and now it is number 3 However, the biggest part of the noise-almost 50%- is coming from the ships. So if port authorities want to do something about noise, they do something about shipping noise. So how can this noise be controlled? This is a question where you come in.

The IMO also said something about noise only regarding the inside of the ship but no rules for the surroundings, such as the ventilation system, were enacted and that is something which should be incorporated as well. Or one can get alternative marine power and reduce the noise coming out of a ship which of course is an expensive solution. You get a reduction for bulk carrier about 10 dB for , tanker probably 0, for container about 5 dB, RoRo ships-with a large ventilation- is about 0 dB, so it is not always helping the case and it could be done much cheaper as well. First of all, install a proper silencer, mostly in place and secondly, if that is in place, put on silencers on vents, which are usually not present and they do not cost that much. Acoustic louvres reduce noise by 10 dB and cost €1000/m2 while duct silencers by 20 dB with a cost of 2000/m2. Not too much I think.

But how do you get to build these ships with less noise? Port rates could be one of the issues that would enforce such things. IMO taking steps to resolve the noise issue would be a fruitful initiative but of course this takes time and it could be done faster.

We want to start a project on noise reduction. The objectives are a) to reduce the nuisance in ports from moored ships, b) have a practical measurement method of the source and c) introduce best practices/design tools and decision tool to judge a ship.

In conclusion, moored ship noise is an important environmental factor. Mitigating noise measures are easily performed as they are relatively cheap. Ship rewards can stimulate the use of silent ships and will help to improve the environment, as we live in the environment and we should take care of it. The project on moored ships noise reduction is on the way and you could be part of it. Your information is needed to make this project work and make the right decisions.

Above text is an edited article of J.Rob Witte presentation during the 2016 GREEN4SEA Conference & Awards

Rob Witte, born 1958, has earned his master at the Delft University of Technology, studying acoustics. Directly after, he started his career for DGMR. His work consists of many all-round environmental projects but his main focus is on port noise. He and his team advises the ports of Rotterdam and Amsterdam and many companies like container terminals (a.o. ECT, RWG)  and chemical industry (a.o. DOW, TRN , BP) and RoRo terminals (a.o. Stenaline, C.Ro). Furthermore Rob was a member of the team that renewed the Dutch noise calculating scheme for industrial noise, was project leader in the European research project on industrial noise called IMAGINE and is part of the follow up called CNOSSOS. Especially port related issues and noise were addressed in the NoMEPorts (2008) research project with Rob as technical advisor.