The UK National Oceanography Centre (NOC) presented a study according to which the impacts of seabed mining on deep-sea ecosystems can last for decades. The scientists used a robot submarine to map and photograph as much as they could from the seafloor in fully detail. Tracks on the seafloor, as a result of mining operations, were still visible, whereas the negative effects on marine life were firstly observed in 1989.

In order to get an insight into the impact of mining, the scientists visited a site that was exposed, to sea mining activity, almost 30 years ago. The site the scientists investigated is located in the deep Pacific Ocean off Peru, with about 4,000 metres of water depth. The first experiment in the area, was conducted in 1989 by a team of German researchers.

The study, recently published in Scientific Reports, was able to pinpoint individual animals over a wide area and relate their abundance and distribution to the tracks. The mobile species, as the sea cucumber, were able to move and change habitat, other animals as sponges and sea anemones were left attached to the seafloor and remained absent from directly disturbed seabed.

According to the study, the aim of deep sea mining is polymetallic nodules, potato-shaped rocks rich in copper and manganese. Yet, these nodules provide a stable anchoring point for the development of anemones, soft corals and sponges, while also boost the growth of diverse communities. The nodules take millions of years to form.

Thus, the mining activities result to removing the nodules, which means removing the home of many of these filter-feeding animals.

Concluding, the study was conducted by the NOC and the GEOMAR institute in Kiel (Germany) funded by the European Union Joint Programming Initiative (JPI-Oceans), an international project aiming to assess the ecological aspects of deep-sea mining. The NOC is working with the U.K. Government and the International Seabed Authority to inform developing regulations regarding deep-sea mining.

For more information you may click on the PDF herebelow 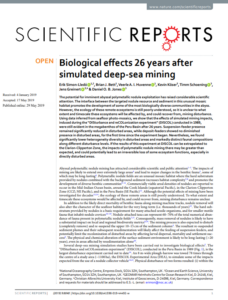