NOAA alerts the risks of the Arctic warming

The National Oceanic and Atmospheric Administration (NOAA) published its updated edition of the "Arctic Report Card for 2019", focusing on the risks generated from the warming air temperatures, the declining sea ice and the warming waters. The report pays attention basically to the Bering Sea region.

The remarkable decrease in the sea-ice extent in the Bering Sea during the last two years, along with the increasing ocean temperatures have a negative impact to the ecosystem of the Bering Sea, including northward migration of fish species.

Warming Arctic, access to our subsistence foods is shrinking and becoming more hazardous to hunt and fish. At the same time, thawing permafrost and more frequent and higher storm surges increasingly threaten our homes, schools, airports, and utilities.

Although, the Bering Sea considered to be one of the largest fisheries for the America, the rising temperatures harm the economy of the U.S. Basically, more than 40% of its annual fish and shellfish catch are affected due to mass fish migration.

The changes going on have the potential to influence the kinds of fish products you have available to you, whether that’s fish sticks in the grocery store or shellfish at a restaurant.

...according to a Rick Thoman's statement published on Reuters. 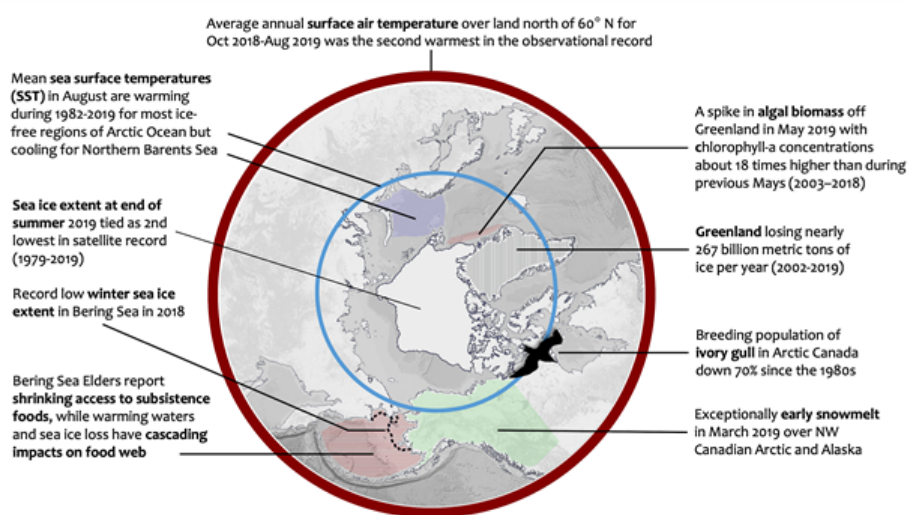 NOAA further highlighted that at the end of summer 2019, the sea ice extent achieved the second lowest satellite record from 1979 until 2019. Moreover, a low in the thickness of the sea ice was also noticed, resulting an ice cover that is more vulnerable to warming air and ocean temperatures.

With less ice meaning more open water, that leads to the absorb of more solar radiation, which increases ocean warming.

The reasons of this record low sea ice coverage, considered to be a combination of the following factors :

2) late freeze-up of the southern Chukchi Sea in the preceding falls and delayed ice arrival in the northern Bering Sea.

3)warm surface ocean temperatures that slowed the advance of the ice.

Another remarkable fact the report shows, is that Greenland is losing about 254-267 billion tons of ice per year, while ice discharge from most regions have been approximately steady for the past decade.

As for the land surface air temperature north of 60° N for October 2018-August 2019, the report presented that it was the second warmest since 1900. Concluding, warming air temperatures along with the climate change affect ecosystems and communities on a regional and global scale. 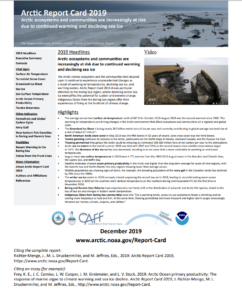