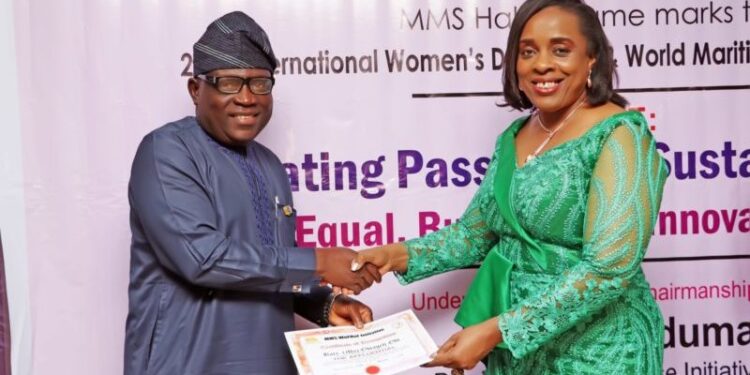 The Representative of the Managing Director, Nigerian Ports Authority (NPA), and the General Manager, Corporate and Strategic Communications, Engr. Adams Jatto, presented a Certificate of Recognition to Barr. Ms. Obiageli Obi during the 2019 MMS Hall of Famers’ Day/Night of Empowerment in Lagos / Credit: NPA

Nigerian Ports Authority (NPA) is fully committed to the welfare of women especially those in the Maritime sub sector, was the key message of the organization’s Managing Director, Hadiza Bala Usman, in a statement during an official event in Lagos, earlier in March.

Represented by the General Manager, Corporate and Strategic Communications, Engr. Jatto A. Adams, while addressing stakeholders at the 2019 MMS Hall of Famers’ Day and a night of Empowerment in Lagos, Mrs. Bala Usman, called on women in all areas of endeavour to always prove their worth, because according to her, ‘attaining a great feat in life has nothing to do with gender, but performance’.

She further urged women to seize the opportunity offered through women empowerment programmes to better their lot thereby contributing most meaningfully to the growth of the Nation’s economy.

The Managing Director commended the organiser for the theme “Empowering Women in the Maritime Community” which she said is in line with the IMO 2019 World Maritime Day.

IMRF: Diversity & Inclusion during the pandemic still matter, requiring commitment from the top

At the 120th session of its Council meeting in London, IMO selected the “Empowering Women in the Maritime Community” as the World Maritime Day theme for 2019, in an effort to raise awareness of the importance of gender equality, in line with the United Nations’ Sustainable Development Goals (SDGs).

Earlier, the founder of MMS WOFHOF initiative, Kingsley Anaroke disclosed that the advocacy for gender parity requires concerted efforts by all stakeholders if the mission must be achieved.

Mr. Anaroke further called on the Federal Government to introduce a gender character policy like the existing Federal Character principle to reflect the sensitivity of the United Nations SGDs on equality with 40% employment opportunity reservation for women in both public and private sectors.