The United Nations Secretary General's office launched the 'Activities of the United Nations Office for West Africa and the Sahel' report, focusing on Nigeria loosing approximately $2.8 billion during 2018, as a result of crude oil and maritime crimes. Maritime crime, including piracy, dominated in the coast of West Africa and posed a big threat to peace and development in the region.

Mainly, despite piracy, the report noted an increase in the drug trade in the region.

According to UN's report, between January 1st and November 23rd, there were 82 reported incidents on maritime crime and piracy in the Gulf of Guinea. Additionally, the Gulf of Guinea poses many challenges to those passing through, since many are the incidents reported every year.

Moreover, in the Republic of Benin, the Gambia and Nigeria, more than 50 kilogrammes of cocaine were seized between July and October by joint airport interdiction task forces.

The report is published on time when concerns were raised in April by the International Chamber of Commerce’s International Maritime Bureau that warned of the surge in armed attacks against ships around West Africa, and said that the attacks were pushing up global levels of piracy and armed robbery at sea.

Concluding, the Gulf of Guinea accounts for 29 incidents in the first quarter of 2018, more than 40% of the global total. Of the 114 seafarers captured worldwide, all but one was in this region, the report noted. 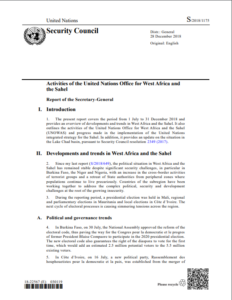