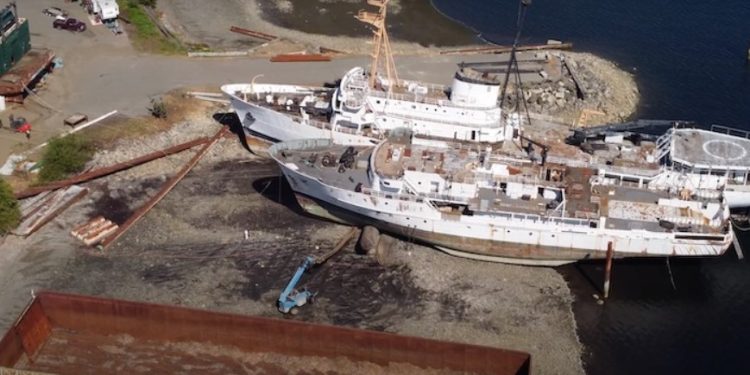 Nearby residents and K’ómoks First Nation (KFN) have raised serious concerns regarding the conditions at the yard for the past two years. In February 2022, following local and international pressure, the Comox Valley Regional District Board determined that the scrapping of vessels is not a permitted activity in the Industrial Marine (IM) zone according to the Zoning Bylaw, and sought an injunction against DWR in an attempt to shut it down.

In April 2022, MP Gord Johns raised in the House of Commons the issue of shipbreaking at Union Bay and the lack of national regulation. Yet, despite these developments, local residents inform that operations at DWR have never ceased, with the former US government-owned vessel NOAAS Miller Freeman (R 223) ready to be scrapped.

Given its age and type, the NOAAS Miller Freeman ship is likely to contain high amounts of hazardous substances in its structures, such as toxic paints and asbestos, which are a threat to humans and local wildlife, including shellfish. The ship was sold at auction in 2013.

The Government Services Agency cautioned bidders about the presence of asbestos in pipe insulations, floor tiles, and wallboards. Without mentioning the exact amounts of hazardous materials, the bidding documents specifically recommended the buyer(s) to not release asbestos fibers by “cutting, crushing, sanding, disassembling”, operations that will take place at DWR once the vessel will be completely pulled out of the water.

In addition to stopping the work in Union Bay, a federally designated zone of water that is biologically significant, the groups call on the Federal Government and the Province to regulate shipbreaking in Canada and mandate that vessels be recycled in a safe and environmentally sound manner at proper industrial sites that ensure a contained environment.