Overall the report addresses that about 200 floating structures have been identified as scrapped on a worldwide scale since 2015, an estimated 40% of these assets ended up on South Asian beaches, where they were broken up under conditions that cause irreparable damage to the coastal environment and put workers’ lives and health at risk.

The fixed platforms, built in the 1960s-70s-80s, located in the North Sea have to be decommissioned according to the rules under the OSPAR convention.

The OSPAR Convention states that a fixed platform is removed entirely by its operator (the oil and gas company), unless the risks of complete removal are greater than the possible risks of partial removal.

Thus, in line with the legislation and the fixed structures that sees the platforms being disassembled or disconnected and then taken to shore in sections or in one piece, it is easy to control and oversight the decommissioning of fixed platforms in the North Sea.

With the oil and gas sector seeing a downturn since 2014, an increasing number of offshore units have been sold for scrap

For the time being, there is a great number of floating platforms of oil and gas in the North Sea; Specifically, there are currently 59 floating mobile drilling rigs in the North Sea, 18 of which were built before 2001. It is estimated that some of the older ones will be scrapped in the near future.

According to the findings of the report, the top scrapping destinations for oil and gas units are South Asia and Turkey, which have carried out 79% of all scrapping operations in the last four years. Whereas, out of the 185 oil and gas assets which have been identified as broken up since 2015, 79 ended up on the beaches of South Asia.

Therefore, while presenting the report during a seminar held in Oslo, Norway, the NGO Shipbreaking Platform notes the importance of green recycling capacity, already existing in the region. Improving the recycling of offshore structures and ships in Europe would furthermore bring opportunities for the many workers that were laid off after the recession in the oil and gas sector in 2014.

In general, dirty and dangerous shipbreaking in Bangladesh has been strongly criticized both by global NGOs for many years, with marine pollution, hazardous waste dumping and unsafe working conditions, as well as the illegal exploitation of child workers, being among the key areas of concern. 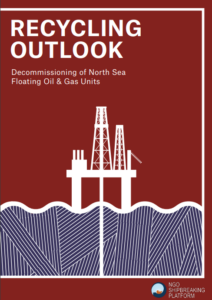