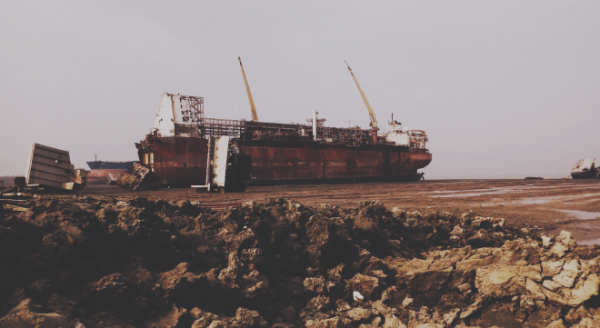 NGO Shipbreaking Platform reminded that it has been one year since the beaching of the FPSO North Sea Producer in Chittagong, Bangladesh, and the legality of the export is yet to be further clarified.

As informed, for scrapping purposes the ship was only allowed to be sold to a facility within the OECD, as any export of hazardous waste outside the OECD is in breach of International and EU law.

However, the vessel’s operators decided to sell it in South Asia for bugger profit, the NGO claims. According to NGO Shipbreaking Platform’s statement, Maersk and Odebrecht provided the UK authorities with a false contract stating that the North Sea Producer had found a new owner who would operate the ship in Nigeria. The North Sea Producer was then directly towed to Bangladesh.

In response, Maersk has claimed in its Sustainability Report 2016 it has cut all commercial ties with the buyer of the North Sea Producer and that it has recycled 40–50 vessels, last year, the vast majority at facilities in Turkey and China.

“The ship was sold for redeployment and transferred to a buyer in April 2016. The contract stipulated that if redeployment was not possible, the unit was to be dismantled responsibly. Yet, in August 2016, we were made aware of the fact that the North Sea Producer had been sent to a recycling yard in Bangladesh. We are extremely disappointed with the outcome of this process, and have therefore terminated all commercial relations with the buyer.”

“We are committed to recycling our vessels in a responsible way when they reach end of life, ensuring workers’ safety and rights as well as minimising the environmental impact,” the Danish giant stressed.

Once the ship arrived at Janata Steel in Chittagong, and upon alerts issued by local NGOs, the Bangladesh Attorney General of the Department of Environment set up a special committee to determine the presence of contaminated residues, and to investigate the ship’s import.

Upon a request from the Platform’s member organisation Bangladesh Environmental Lawyers’ Association (BELA), the report on the ship’s condition was released in June.

“Its conclusion was that radioactive residues were found upon inspection and that further surveys needed to be carried out on the whole ship.”

BELA subsequently got an injunction on the breaking of the North Sea Producer until October, which is when the Court will resume the case after the Eid recess. In the UK, the Platform demanded the Secretary of State for Environment, Andrea Leadsom, to investigate the export from Teesport.