Credit: The UN of Texas Austin

Scientists at the University of Texas at Austin's Marine Science Institute have discovered almost two dozen new types of microbes, which use hydrocarbons, like methane and butane as energy sources to survive and grow. This means that these bacteria might be able to help reduce greenhouse gases and they could possibly be useful for cleaning up oil spills.

In a research published in Nature Communications, researchers highlighted a variety in the microbial communities living in the extremely hot, deep-sea sediments located in the Guaymas Basin in the Gulf of California. The team found new microbial species that are so genetically different from those that have been previously studied. Many of these same species possess keen pollutant-eating powers.

Moreover, the new research represents the largest-ever genomic sampling of Guaymas Basin sediments. The results found 551 genomes, 22 of which represented seen-for-the-first-time microbes. Only about 0.1% of the world's microbes can be cultured, which means there are thousands, maybe even millions, of microbes yet to be discovered.

Baker's team, the paper's primary investigator, conducts researches on interactions among microbial communities and the nutrients available to them in the environment. This is achieved by taking samples of sediment and microbes in nature, and then extracting DNA from the samples. Then, the researchers sequence the DNA to piece together individual genomes, the sets of genes in each organism, and infer from the data how microbes consume different nutrients.

Brett Baker, highlighted that the ocean is so deep that there is definitely more unexplored biodiversity and microscopic organisms that are capable of degrading oil and other harmful chemicals. He continued stating that the ocean is full on hydrocarbon gases, such as methane, propane and butane and there is a possibility that the microbes prevent greenhouse gases from being released into the atmosphere.

He added that the findings concerning microbes are just 'the tip of the iceberg' in terms of diversity in the Guaymas Basin.

Also, the collection was achieved by using the Alvin submersible, the same sub that found the Titanic, because the microbes live in extreme environments.

Finally, this research was supported by the U.S. Department of Energy, the Sloan Foundation and the U.S. National Science Foundation. 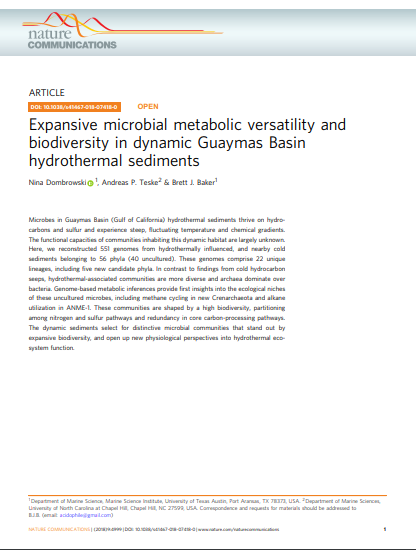