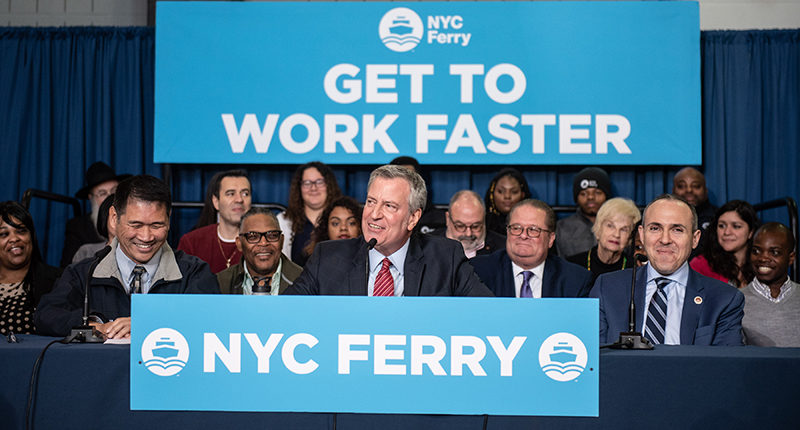 After his State of the City address last week, New York's Mayor Bill de Blasio released additional details about the expansion of the NYC Ferry system, which will begin serving all five boroughs in 2020. The expansion is expected to increase service for many waterfront communities.

Following the launch of the Lower East Side route in August 2018, New York City Economic Development Corporation (NYCEDC) commenced the 2018 feasibility study to determine whether the system could expand to serve more waterfront communities throughout the five boroughs. The study included feedback from New Yorkers, elected officials, and community boards.

The expansion includes the addition of two new routes that will run from Staten Island and Coney Island, plus the modification of two existing routes to include new stops in the Bronx and Brooklyn. A new ferry stop in the Throggs Neck/Ferry Point Park section of the Bronx will join the Soundview route, and a stop at the Brooklyn Navy Yard will be added to the Astoria Route.

In 2015, Mayor Bill de Blasio announced his vision for a six-route citywide ferry service that would expand transportation access across the city affordably and reliably.

On this context, in the summers of 2017 and 2018, NYCEDC launched the East River, Rockaway, South Brooklyn, Astoria, Lower East Side and Soundview routes. With 21 landings across New York City, NYC Ferry has served nearly eight million riders to date.

With the addition of the St. George and Coney Island routes, and the Throgs Neck/Ferry Point Park and BK Navy Yard’s landings, revised annual ridership forecasts project the system will reach 11 million annual riders by 2023.

In May of 2018, the de Blasio administration announced it was preparing to invest $300 million in capital for the service over the next five years.

The long-term capital plan announced in May 2018 will invest in infrastructure improvements and upgrades to existing infrastructure, larger capacity vessels, a second homeport facility, and improvements to the City’s two main ferry terminals, Wall St./Pier 11 and E. 34th St. The City will invest an additional $100 million in capital to add fleet capacity, build new landings, and invest in existing landings to support the system’s expansion.

A total of 25 jobs such as captains, deckhands, customer service agents, ticketing, operations and more and is currently accepting applications. Hiring in advance of the system’s expansion in 2020 and 2021 will commence next spring.