New technologies to reduce costs in the bulk carrier industry 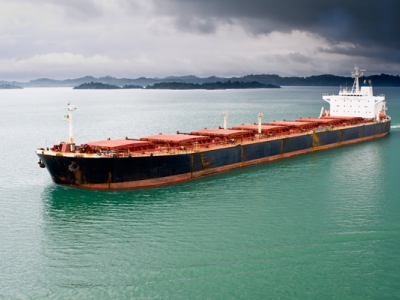 DNV GLs latest Bulk Carrier Forum looked at future trends and some of the classification societys most recent projects in the segment.

Public authorities are increasing the pressure on the shipping industry to reduce emissions and invest in sustainable technology. Narve Mjøs, Director Battery Services & Projects at DNV GL – Maritime, gave the forum participants an update on battery and hybrid technology.

“Hybridization holds great potential for all ship types, including bulk carriers. For example, lithium-ion batteries could take over in waiting situations, in environmentally sensitive areas and in port, reducing fuel consumption, maintenance and emissions. They may also increase the ship’s responsiveness,” he explained.

In a joint development project with the Norwegian shipping company Grieg Star, DNV GL examined how much energy and operational costs a 50,000 dwt open hatch vessel could save by using batteries for operating the cranes during loading and unloading.

Simulations showed that using a hybrid system consisting of two auxiliary engines and one battery, instead of three auxiliary engines, would save some 100 tonnes fuel annually and require less maintenance, spare parts and overhaul costs, resulting in a substantial annual saving and a payback time of 1-3 years.

“We plan to carry out more investigations examining the potential of battery and hybrid solutions for the bulk carrier industry. Currently, we are in the process of establishing joint industry projects with several shipowners looking at geared vessels such as handymax and supramax vessels,” said Morten Løvstad, Business Director Bulk Carriers at DNV GL – Maritime.

“We looked at different structures and components for potential weight saving, and found that hatch covers made of glass-reinforced plastic (GRP) hold the biggest potential for reducing the weight of a vessel and thereby increase its cargo capacity,” he explained.

‘For example, the study showed that a panamax bulk carrier would be able to increase its cargo load by 320 tonnes, and as an added bonus downsize its crane capacity and use electric motors for handling these lighter hatch covers.

The advantage of composite hatch covers, in addition to saving weight, is that they require less maintenance and are not prone to cracking and corrosion, a common problem with conventional steel hatch covers. The sealing system may also be improved when using a light-weight, compiste hatch cover.

“We expect to see this system being realized in the next two years,” said Løvstad. The Danish owner Nordic Bulk Carriers has been part of the joint industry project with DNV GL and Oshima, and has obtained an approval from the Panama Maritime Authority for a potential retrofit to composite hatch cover on one of its panamax vessels in operation.

One of the operational issues that the forum looked at was cargo liquefaction. This is a problem which has been recognized as one of the major safety risks for bulk carriers, but has not yet been properly accounted for by international regulations.

To support shipowners in mitigating the risks of cargo liquefaction, DNV GL has just finalized a guideline for the design and operation of vessels with dry bulk cargo that may liquefy.