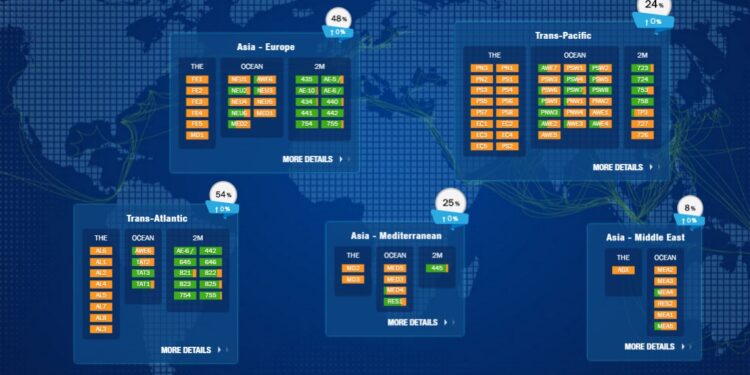 In particular, Route Master automates the process of determining the appropriate routes based on customized parameters including the transit times, reliability, cost, and carriers. Based on carriers’ proforma and actual published schedules, shippers are able to search and compare routes that are between three months in the past and six months into the future.

In addition, Route Master displays which routes are carriers’ own unique offerings and which ones belong to an alliance network. It also shows the vessel operator for each route and calculates on-time port arrival reliability, based on the vessel operator of the service. With increased visibility to vessel operators and transshipment routes, shippers can make more informed decisions to reduce risk, increase performance of on-time arrivals, and lower costs by selecting routes based on both carriers and vessel operators.

The company explains that, starting from April 1, 2017, the new OCEAN Alliance and THE Alliance will kick-off their respective networks and the 2M Alliance will launch new services. Based on the three mega alliances’ proforma schedules announced through March 10, 2017, shippers will experience significant changes in their carriers’ service networks. On the trans-Pacific trade alone, the alliances will offer 18% fewer direct routes and 33% of the routes will have transit times that are shorter or longer by three or more days compared to the member carriers’ alliance offerings before April.

“Shippers are facing vast service changes as they negotiate their contracts this season,” said Lionel Louie, chief commercial officer of CargoSmart. “Route Master empowers transportation planners to gain transparency to carriers’ services and performance. They can now compare the new route options based on their trade preferences to optimize their supply chains and mitigate risk.”