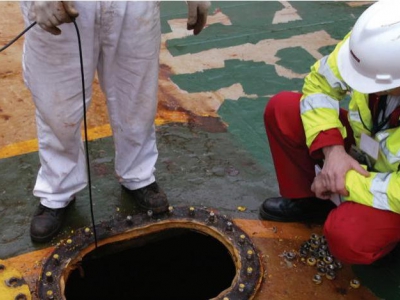 The Sub-Committee on Dangerous Goods, Solid cargoes and Containers (DSC) was held by the IMO in London from 16 to 20 September 2013. An issue of special interest was the carriage of appropriate atmosphere testing instruments in Enclosed Space Entries.

Occasioned by a number of accidents where crewmembers have died during inspection and work in enclosedspaces (cargo spaces, tanks, non-ventilated stores rooms, etc.), the Maritime Safety Committee (MSC)adopted new regulations on training in enclosed space entry in June this year.

It is a precondition for safe entry to such enclosed spaces that the crew have previously ensured that the atmosphere in the space is not harmful. Consequently, the DSC Sub-Committee had been tasked with the drawing up of provisions hereon.

The Sub-Committee also agreed a draft MSC circular on Guidelines to facilitate the selection of portable atmosphere testing instruments for enclosed spaces as required by SOLAS regulation XI-1/7, for submission to MSC 93 for approval.Draft consequential amendments to the Code for the construction and equipment of mobile offshore drilling units (1979, 1989 and 2009 MODU Codes) were also agreed.

The proposal will be forwarded to the Maritime Safety Committee (MSC) for its consideration.

1.Agreed a draft amendment to SOLAS Chapter XI-1 for submission to MSC93 as follows:

3.Agreed draft consequential amendments to the Code for construction and equipment of mobile offshore drilling units (1979, 1989 and 2009 MODU Codes) for approval in principle by MSC93 and subsequent adoptions in conjunction with associated SOLAS amendments.

4.Concurred with the Group's view not to amend the HSC and DSC Codes; and

5.Agreed that training issues on atmosphere testing instruments are adequately covered in the STCW Convention, therefore no further action is necessary in this regard.

Learn more information about Enclosed Spaces in the Safety4Sea articles