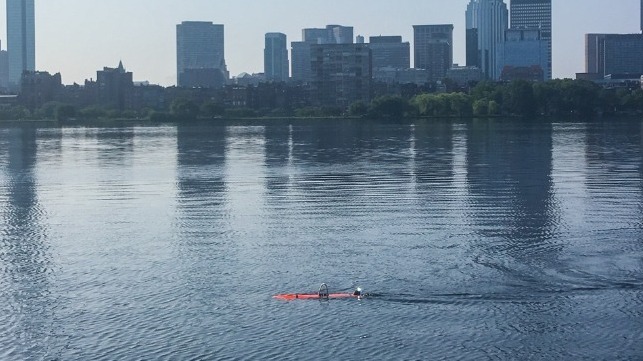 Detecting an unmanned underwater vehicle (UUV) is usually achieved by intercepting the noise by its propeller. However, this is not possible in a noisy harbor. Now, researchers a new solution to sense UUVs more efficiently.

Namely, in a study published in the Journal of the Acoustical Society of America, researchers at Draper, Massachusetts Institute of Technology (MIT) and Woods Hole Oceanographic Institute (WHOI) have developed an acoustic remote sensing method for high-precision propeller rotation and speed estimation of unmanned underwater vehicles.

UUVs can be used for a variety of applications, including national security and ocean exploration. The robots selected for this study belong to the smallest class of vehicles called micro-UUVs, which have a diameter of six or fewer inches.

Detection, classification and tracking of ships are important tasks to ensure port security, as well as the security of coastal and offshore operations, explains Kristen Railey, who led the study as a Draper Fellow:

A state of the practice technique for identifying the presence of ships is by analyzing passive acoustic data with the Detection of Envelope Modulation on Noise (DEMON). The DEMON method, which operates by filtering propeller noise, varies by vessel, and can be challenged in a noisy environment.

In this study, the authors attempted to isolate and characterize motor noise, and they focused on brushless DC (BLDC) motors, due to their prevalence in UUV propulsion systems. They also designed a passive acoustic, high-precision method for estimating a micro-UUV’s propeller rotation frequency.

In addition, quieter UUVs could have many benefits, the researchers explain in their paper:

Understanding the origins of acoustic noise in autonomous platforms can inform quieter UUV propulsion design to avoid interference with onboard sensors and disturbance to marine life. In the future, based on these findings, quieting techniques for BLDC motors in UUVs can be compared and assessed

While the current work is focused on micro-UUVs, the new method can also apply to other robotic platforms that are powered by mass-manufactured BLDC motors. Brushless motors are found in electric vehicles, hybrid vehicles, personal transporters and electric aircraft.