Starting from 12 January 2021, vessels that have visited certain ports in Asia Pacific between May-September in the previous 24 months must document that they have been inspected and “certified free of Asian Gypsy Moth” prior to arriving in Argentina.

This is according to a new resolution by the Argentine National Food Safety and Quality Service (SENASA) aiming to ensure that all life stages of AGM, including egg masses, are removed from vessels prior to arriving in Argentina, according to information provided by Pandi Liquidadores S.R.L and Gard P&I Club.

The AGM is a destructive forest pest, mostly found in Asia Pacific and spreading via ocean-going vessels in international trade. If introduced in countries where it does not exist naturally, it has the potential to seriously affect the country’s agricultural and forest resources.

The new Argentine resolution requires vessels that, in the past 24 months, have visited one of the AGM regulated areas in Asia during the specified risk period (that is, during the AGM flight season when females lay their eggs), to:

Argentina base their AGM requirements on the following definition of regulated areas and specified risk periods: 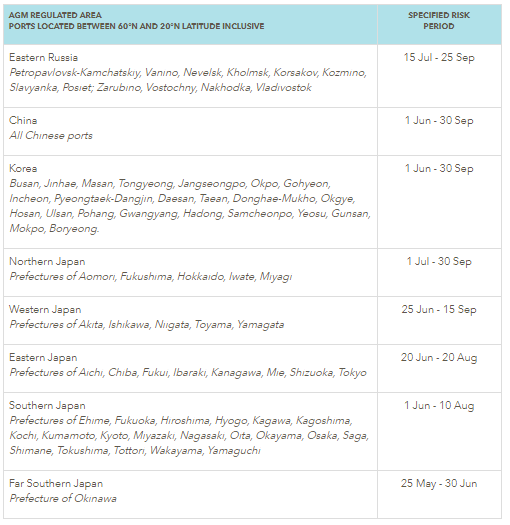 Vessels that in the past 24 months have visited one of the AGM regulated areas outside the specified risk period are exempted from the certification requirements, but are still required to notify SENASA about such visits.

All vessels arriving in Argentina that, in the past 24 months have visited one of the AGM regulated areas will be subject to an assessment of risk to determine the need for inspection.

A vessel’s overall AGM risk, and the extent and location of the required inspection, will be determined based on trading pattern, length of stay in regulated areas, official certificates as well as seasonal variations such as population levels of AGM.

Earlier this week, the US CBP issued a marine notice, also advising all vessels calling ports in AGM region during the high-risk flight season to arrive with a valid AGM free certificate.