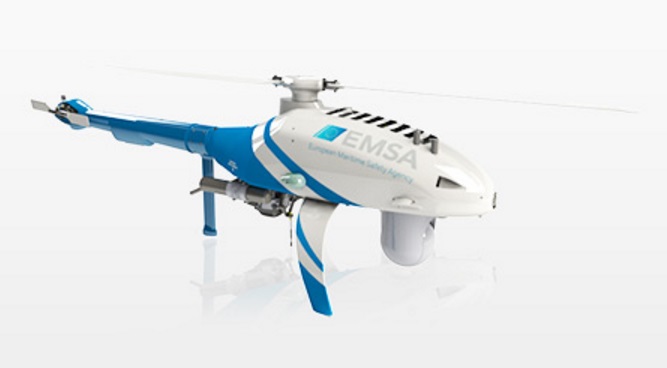 New agreement to use drones for ship emission monitoring

Martek Marine has been included on a ground breaking framework contract by the European Maritime Safety Agency for Remotely Piloted Aircraft Systems services in the maritime environment.

The European Maritime Safety Agency (EMSA) was established for the purpose of ensuring a high, uniform and effective level of maritime safety and prevention of pollution by ships.

Due to the recent entering into force of the new limits for sulphur content of marine fuels since 1 January 2015, Directive (EU) 2015/253 of 16 February 2015 laying down the rules concerning the sampling and reporting under Council Directive 1999/32/EC as regards the sulphur content of marine fuels, SOx emissions from ships need to be monitored. The enforcement by Member States under Directive 1999/32/EC (as amended) will require monitoring of the emissions and information exchange between the responsible administrations.

To improve environmental surveillance capabilities, data from new sensors, in particular from Remotely Piloted Aircraft Systems (RPAS), are to be incorporated to provide information to Member States. EMSA will organise and provide, as an institutional service provider, pilot RPAS service operations in support of Member States focusing on marine pollution detection & monitoring and emissions monitoring. However, this technology has a multipurpose character and could in an emergency be used for other purposes, if necessary or requested by Member States, the European Commission and other EU agencies.

Martek Marine have been awarded one of several framework contracts launched by EMSA which deals with “Remotely Piloted Aircraft System (RPAS) services in the maritime environment”. The contract won by Martek is specifically for ship engine emission monitoring by RPAS. This new requirement requires an RPAS (drone) to sample gases from a vessel’s emissions plume by using a sophisticated payload of electro optical, infra-red imaging, gas emission and AIS detection sensors.

The RPAS can be flown over 50 km from the ground station with instant and continuous video being streamed back to the ground station and Member States. An on-board gas analyser draws samples of air and monitors SOx, NOx and CO2 levels to determine possible breaches in EU law on the sulphur content of a ship’s fuel.

According to the company, the RPAS can operate over 50 kilometres away from the ground station, beyond visual line of sight (BVLOS).

Development is also underway to incorporate satellite command & control and payload data streaming, so the RPAS can operate in what is known as BRLOS (beyond radio line of sight) over 100 km away. In order to operate effectively in the harsh maritime environment, the RPAS can withstand storm force wind and heavy rain, snow and salt spray.

“We’ve worked hard and invested big to pioneer the maritime application of drone technology in the last 3 years. This EMSA contract allows us to combine our original ‘world first’ of ship SO2/CO2/NOx monitoring, with our unique drone platform to deliver another world first. We’re determined to ‘change the world using drones’ and this is the first of many applications which we intend to pioneer.

We have made a real commitment to drone technology and envisage them bringing huge benefits to maritime operations and this tender allowed us to marry this capability with our world leading emissions monitoring pedigree.”