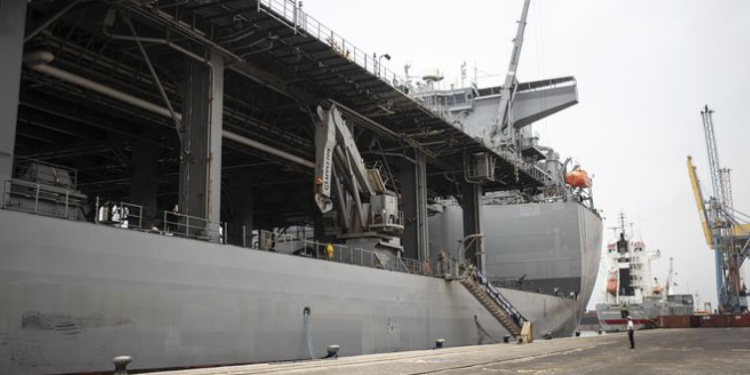 To remind, West African loses about 800,000 tons of fish a year, worth almost $2 billion in gross revenue, to illegal activities by both foreign and domestic vessels, Pierangelo said. This removes vast seafood protein from the region.

“Ship visits like this one clearly demonstrate the U.S.’s continued dedication to our partners in the Gulf of Guinea as they strive for security of their resources, their economy, and their people,” Claire Pierangelo, U.S. Consul General in Lagos, told reporters.

"Maritime security is not a one nation obligation."

USS Hershel "Woody" Williams arrives in Tema, Ghana, to meet with members of the Ghanaian Navy and to participate in training alongside the @NigNavyToday. #NavyPartnerships@USEmbassyGhana

Nigerian waters are at the center of the Gulf of Guinea, a vast expanse of the Atlantic Ocean stretching from Senegal to Angola that’s the most dangerous part of the world for sailors, accounting for almost all kidnappings at sea in recent years.

The U.S. investments and donations to the Nigerian military is worth more than $559 million, part of which is the naval coast guard transfers renamed NNS Okpabana and NNS Thunder.

The Covid-19 outbreak and restrictions led to a surge in piracy levels, though that slowed this year and is expected to ease further as economies pick up, Graham said.