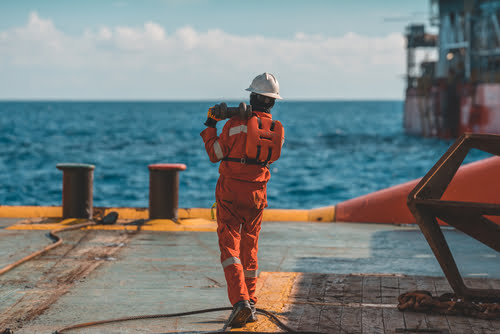 A research vessel is at the centre of a pay and immigration dispute, where a contractor breached immigration and labour laws to employ seafarers in the UK illegally, as Nautilus International reported.

Namely, a foreign seafarer was hired to serve onboard the survey vessel Prince Madog (IMO 9229611) at Menai Bridge, where the Welsh mainland connects to the island of Anglesey. The Union was told that other seafarers aboard were also working illegally.

Following the situation, Nautilus International arranged for International Transport Workers’ Federation (ITF) inspector Tommy Molloy to visit the vessel on 23 October. He discovered a Filipino crewmember was being paid a monthly salary of $1,900 USD for eight hours work per day, seven days a week. This amount is equal to £5.71, significantly lower than the UK National Minimum Wage for a 53-year-old man.

The Filipino seafarer had no visa or permit to work in the UK. However, documentation seen by Nautilus International shows the seafarer’s passport had been stamped by UK Border Force allowing him to enter the country on the condition that the seafarer was entering the UK to join a vessel that was due to leave the country.

The Prince Madog operates almost exclusively, and certainly predominantly, in UK waters. That means that Bangor University and project funder, the Welsh Government, need to make sure that contractor O.S. Energy is upholding UK minimum wages and maximum work hours according to UK law. This is not some far-off vessel with a workforce they can get away with exploiting.

Other crewmembers include two Polish crew who were also in a similar situation, although they had higher wages they were still being employed illegally. The remainder of the crew were predominantly UK nationals, who were shocked to discover this had been happening.

Nautilus International is calling for Bangor University to put pressure on its contractor to repay the crewmembers it underpaid illegally. The crew has now been banned from working on the vessel, after UK Border Force said the illegally employed seafarers had to stop working for the company. The border agency did not confirm if the seafarers had their wages repaid, or if O.S. Energy would be prosecuted for breaking UK law.

As a result of the actions of the company, the Filipino seafarer was repatriated after only a few days onboard and will now have to wait for a new contract in the Philippines.

‘The poor guy is an innocent victim who did everything he was asked, in accordance with the law as he understood it. It is O.S. Energy which has attempted to circumvent the law of the United Kingdom, and it should be reprimanded fully to serve as a warning to other would-be exploiters attempting to do likewise in our waters,’ Mr Malloy said.

The Prince Madog is operated by German company O.S. Energy but is currently under contract with Bangor University with the help of a research grant from the Welsh Government.

Bangor University head of School of Ocean Sciences professor John Turner said he believed there was a ‘genuine misunderstanding in the hiring of the three members of crew.

‘The University has asked the joint venture [with O.S. Energy] to review processes for hiring staff to ensure they fully comply with UK employment law. Steps will also be put in place to ensure this situation will not recur.’

Concluding, German Marine, the crewing agent based in the Philippines which placed the seafarer with O.S. Energy said it was informed the vessel would be operating out of British waters and that it ‘fully cooperates with the legal requirements’ of the UK.