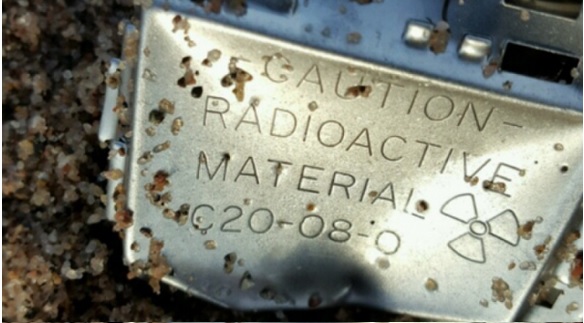 The US Coast Guard said that a mysterious small metal container, about the size of a deck of cards, was found on the beach at Poplar, Wisconsin. The container had what appeared to be radioactive markings. However, following investigation , it was determined that there was no emission of radioactivity.

Federal, state and local agencies worked jointly to determine the contents and source of a mysterious container found on the beach near the mouth of the Poplar River in Poplar, Wisconsin, Wednesday.

A person walking on the beach saw a container about the size of a deck of cards with what appeared to be radioactive markings on it Wednesday morning and immediately called local emergency services.

Initial responders from the U.S. Coast Guard and Superior, Wisconsin, Fire Department determined the box was not emitting any radioactivity.  A follow-on investigation by the Wisconsin National Guard Civil Support Team and Wisconsin Department of Health Services ensured there was no radiation source from the surrounding area and that the object was not a hazard to the public.

The object has been removed by the Wisconsin Department of Health Services for proper disposal.