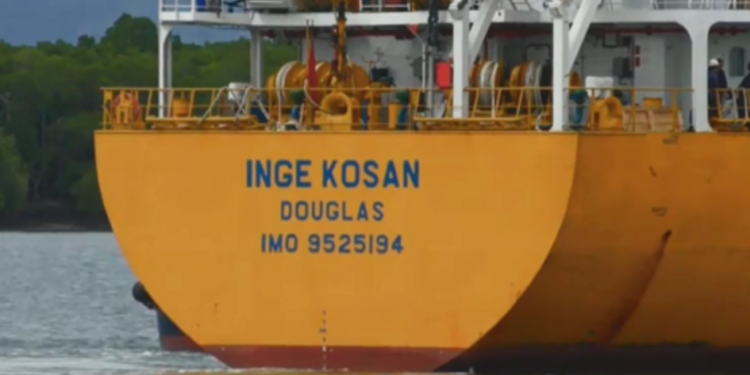 Australian authorities are being urged to take advantage of the arrival of the gas tanker Inge Kosan at anchorage off Brisbane to undertake a thorough, independent investigation into the death of a one of the seafarers, whose body washed up on a beach in Vanuatu.

It has been revealed that the Australian energy giant Origin Energy is the long-term charterer of the Inge Kosan, which is contracted to deliver LPG to the company’s import terminals in Papua New Guinea, the Solomon Islands, Vanuatu, and Fiji.

The Maritime Union of Australia said the anchoring of the vessel in Australian waters gave local authorities the best opportunity to properly interview the crew and fully investigate how one of the seafarers died.

There are serious questions that must be answered about how the deceased seafarer died, and how his body came to be washed up on a beach in Vanuatu. Now that the vessel is anchored in Australian waters, local authorities have the opportunity and obligation to launch a thorough, independent investigation.

Deficient equipment could cause “catastrophic accident” at Panama Canal

As Crumlin further explained, the Inge Kosan was on charter to a major Australian business, it had recently left an Australian port, and it was carrying Australian gas to Pacific neighbours. It couldn’t be any clearer that Australia has an obligation to get to the bottom of why one of the seafarers died in the subsequent weeks.

Given the Inge Kosan is one of four vessels in the fleet Origin Energy charters to carry gas around the Australian coast and to their terminals throughout the Asia Pacific region, we are urging the company to offer their full cooperation with an investigation into this tragic death.

What is more, MUA is also concerned about the safety of the crews onboard the other three tankers in the Origin fleet, who are undertaking the same work as the Inge Kosan, and is seeking the implementation of additional safety measures to protect them from a similar COVID outbreak.

“Even if his death was caused by COVID, we need to get to the bottom of whether he was already ill when the vessel departed Australia, why he didn’t receive medical treatment, and how he ended up dead and washed up on a beach.The owner, operator, and charter of this ship all have serious questions to answer about what went wrong to lead to this tragic death”

Concluding, the authority urged that the only way to get to the bottom of this is for Australian authorities to thoroughly investigate, to work with their colleagues in Vanuatu who undertook the autopsy, and to interview the remaining crew members as soon as safely possible.