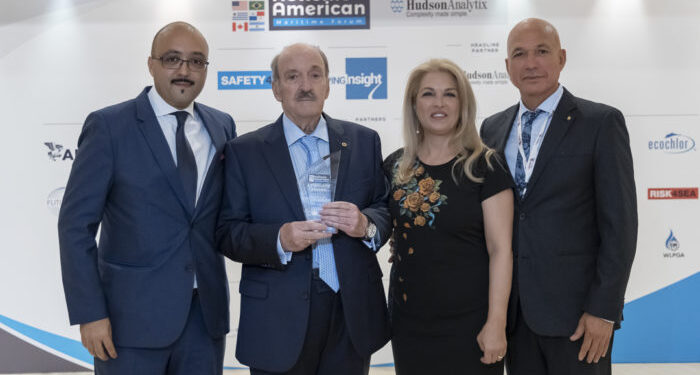 SAFETY4SEA, in collaboration with SHIPPINGInsight, is pleased to announce that Mr. Nicky A. Pappadakis has received the 2019 Hellenic American Maritime Advocate Award, sponsored by Cayman Islands Ship Registry, at a gala dinner and award ceremony which successfully concluded on May 29th at Megaron Athens, The Banqueting Hall, the evening on day one of the inaugural Hellenic American Maritime Forum, in Athens.

Mr. Nicky A. Pappadakis received the award for promoting best practices within the industry when being past Chairman of Intercargo. Born in a traditional shipping family with its roots on the Aegean island of Kasos, Nicky Pappadakis began his career within the family firm of A. G. Pappadakis & Co. in 1961. Mr. Pappadakis himself served periods at sea as an apprentice on tankers and dry cargo vessels, while he was also qualified as an airplane and helicopter pilot. He was one of the first western shipowners to see the potential of China as a business partner and a builder of vessels, and he has maintained close relations with China ever since.

It is a pleasure and an honor to present this most prestigious award to a gentleman who is known to me as just Nicky, as you’ve seen his global contributions.

Accepting the award, Mr. Nicky A. Pappadakis, Past Chairman of Intercargo, stated:

I’m genuinely humble to be considered as an advocate for shipping, and I’m highly delighted that I was judged and proposed by my peers.

Mr. Pappadakis has held numerous important industry roles in Greece based organisations. One key highlight in his career is when he was elected Chairman of Intercargo at the association’s 25th anniversary meeting. In this role from 2005 to 2012, he demonstrated his ongoing deep concern and commitment for the sea, seafarers, safety and the environment. During his career in the industry, Mr. Pappadakis has always been advocating for a more sustainable shipping. ‘’Every country’s richest asset is its young generation and without the next generation we do not have a future. Thus, we must attract more young people to join the industry’’, he has stated.

Other winners of the 2019 HAMF Awards are: Star Bulk Carriers Corp. for the Dry Bulk Operator Award, Viswa Lab for the Innovation Award, Panama Maritime Authority for the Maritime Centre Award, Wärtsilä for the Investment in Shipping Award, USCG for the Guardians of Industry Award, Mrs. Angeliki Frangou, Chairwoman & CEO of the Navios Group, for the Visionary Award and Adm. (USCG Ret) Thad William Allen for the Lifetime Achievement Award.