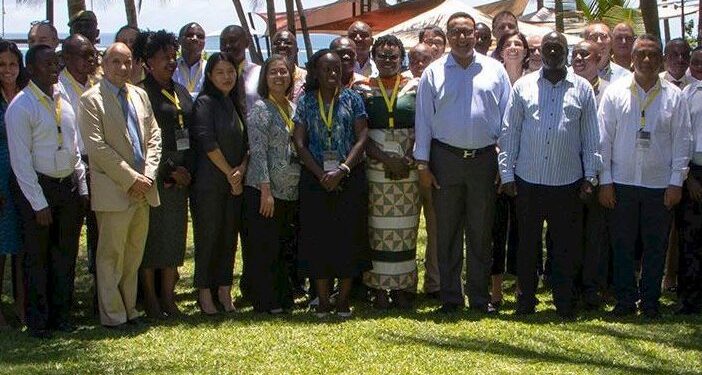 Last week, 76 port and maritime supply chain representatives from 12 countries got together in a Port Stakeholders’ Workshop to agree on measures regarding wildlife trafficking through Mombasa Port, the largest port in Africa and key exit point of African wildlife trafficking, highlighting the urgent need for action against illegal wildlife trade.

The UNDP Resident Representative for Kenya, Walid Badawi, highlighted that “co-operation between countries, agencies and sectors is critical in combating wildlife trafficking—a crime that threatens achievement of the sustainable development goals.”

Namely, all relevant parties agreed that it will take “close information exchange and strategic collective action” to end wildlife crime and the illicit trade of endangered species worldwide.

Walid Badawi, the UNDP Resident Representative for Kenya, further stated that “progressing from sector dialogues through to implementation of tangible actions, such as enhanced surveillance and inter-agency co-ordination, is required to stem wildlife trafficking through ports, including Mombasa.”

Some of the actions proposed were the enhancement of inter-agency, inter-sectoral and international collaboration, cargo risk profiling, policy enforcement and prosecution capacity, as well as information and intelligence exchange in order to reduce wildlife crime.

Moreover, the Director East Africa Office, TRAFFIC, Julie Thomson, noted that “wildlife trafficking is a transport-intensive crime that robs countries like Kenya of their natural resources and heritage.”

Some of the wildlife products commonly smuggled through Kenya’s seaports include pangolins, timber, shark fins but also elephant, rhino, and big cat parts. It was also the case, when two containers declared as tea leaves were later intercepted with more than three tonnes of ivory, four rhino horns, and teeth from leopards and cheetahs.

Notably, a wide range of stakeholders from 31 organisations, including representatives from the Kenya Government, private sector entities, enforcement agencies, non-governmental and intergovernmental organisations participated in the workshop in particular.

The workshop was hosted by The Ministry of Tourism and Wildlife of the Republic of Kenya, in partnership with TRAFFIC, the United Nations Development Programme (UNDP), the United Nations Office on Drugs and Crime (UNODC), and the World Wide Fund for Nature-Kenya (WWF-Kenya) and was further supported by funds from the GEF and USAID.

What is more, in April, Ministers from the ten Association of Southeast Asian Nations (ASEAN) countries issued a joint statement which describes illegal trade of wildlife as “among the greatest challenges of ASEAN as the economic, social and environmental repercussions are severe and widespread in scale.”  The statement also commits member states to improving international co-operation as part of their combined efforts to meet obligations under the UN 2030 Agenda for Sustainable Development Goals (SDGs), one of which calls on countries to “Take urgent action to end poaching and trafficking of protected species of flora and fauna and address both demand and supply of illegal wildlife products”.

Earlier in the year, AECO, an industry association aiming to manage responsible expedition cruise tourism in the Arctic, signed the Buenos Aires Declaration, stating that signatories cannot knowingly enable the carriage or sale of illegally traded wildlife products. AECO has a zero-tolerance policy about illegal trade in wildlife products and encourages visitors to the Arctic to support local communities by buying legal and sustainable products.