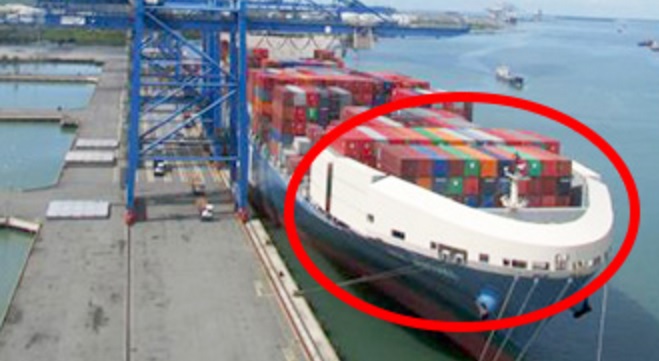 Mitsui O.S.K. Lines (MOL) confirmed that its wind resistance-reducing windshield for containerships reduces emissions of carbon dioxide (CO2) by an average of 2%, after completing a in-service demonstration. The windshield, co-developed by MOL, was installed on the bow of its operated containership, MOL Marvel, for the demonstration test.

The test results revealed a 2% average CO2 reduction after installing the windshield on the bow and sailing at 17 knots per hour, compared to operating an identical vessel at the same speed without the device installed.

MOL says that the test accumulated Big Data on operational status during service on Asia-North America East Coast routes, and compared two sister ships with and without the windshield installed on the bow. It established a method to eliminate the data on the effects of ocean waves, and extracted only the change in performance due to reduced wind resistance.

This project is part of MOL’s "ISHIN NEXT - MOL SMART SHIP PROJECT", which aims to develop and introduce new technologies that will reduce vessels' environmental impact and ensure safe operation, while delivering safe, reliable transport services. The test results presented during the Japan Society of Naval Architects and Ocean Engineers’spring meeting in May 2017.