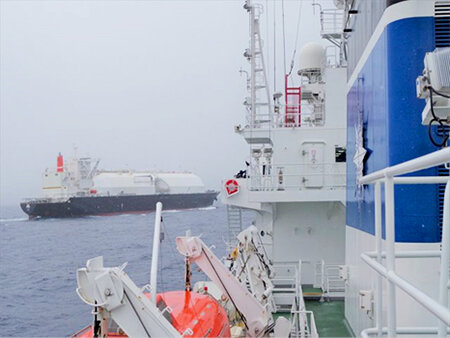 MOL held a joint public-private sector anti-piracy training session with the LNG carrier ‘LNG MARS’ while the vessel was under way southern area of Ise Bay on May 13.

Based on a scenario that pirates were pursuing and closing in on the MOL-operated ‘LNG MARS’, the training focused on emergency telecommunication. The realistic drill included some tension-filled moments as the Japan Coast Guard’s patrol ship ‘Mizuho’ rushed to the scene, and MOL confirmed the effectiveness of its risk management system and ensured that everyone concerned could communicate clearly and swiftly.

More specifically, the training started on the assumption that the LNG MARS was being chased by a suspicious boat, which was closing in on the LNG carrier. LNG MARS sent out a ship security alert, reporting an encounter with pirates to its management company (MOL LNG Transport), MOL’s Safety Operation Supporting Center and the Japanese Coast Guard (JCG).

The ship management company and the Safe Operation Support Center, upon receiving the alert, immediately checked the situation and reported it to the relevant authorities.

As a result of the investigation, the safety of the vessel was confirmed.