A French study started in 2017 by the Cerema, CITEPA and INERIS, reports that air pollution from ship traffic in the Mediterranean Sea can significantly be reduced, because of the introduction of an Emission Control Area (ECA).

According to the study, an ECA would lead to economic, health and environmental cost-benefits in the Mediterranean Sea.

Specifically, the report highlights that particulate matter can be limited by up to 20% and nitrogen dioxide (NO2) levels by up to 76%, causing 14 billion Euros in reduced health costs and over 6,000 lives that can be saved every year.

One of the key findings is that the regions would benefit most from a combined SECA and NECA, as SO2 would be cut by 77% and in port areas even by 100%. In addition, NO2 would be less by up to 76% in coastal areas and the East of the Mediterranean Sea. Moreover, the annual mean of PM2.5 will reduce by 15 to 20%.

The report also presents the extent of emission reduction for different air pollutants on various countries and includes a detailed analysis for several coastal cities. In fact, shipping air pollution can account for 40% of Mediterranean coastal city air pollution. This is happening because of the heavy fuel oil, which emits black carbon, heavy metals, fine particulates, and sulphur dioxide.  subject to respiratory issues as well as inflammations, cardio vascular diseases.

We see that a combined sulphur and nitrogen emission control area will have the greatest effect for the people living in the coastal areas. If governments cooperate well such a regulation could come into effect as early as 2022 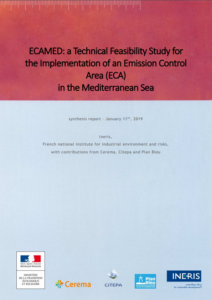