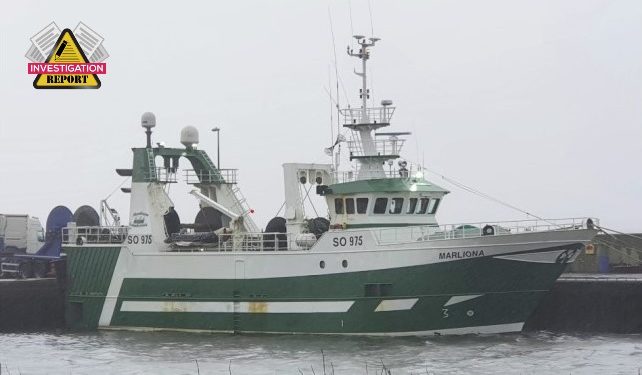 The Irish Marine Casualty Investigation Board (MCIB) published its reports regarding a serious injury onboard on the fishing vessel (FV) “Marliona”, while alongside Greencastle Harbour, Co Donegal, on 3 February 2021.

At approximately 14.00 hrs the Skipper (Casualty) and crew were working the fishing gear onboard the vessel for the day and were getting the gear ready for the next voyage to sea.

The Casualty (who was an experienced fisher and skipper who held the Skipper Limited Certificate of Competency (Fishing)) was working in the wheelhouse, when he was asked by Crewmember B (Deck officer Second Hand Full Certificate of Competency (Fishing) with 11 years’ experience) to slack out the starboard winch as he and Crewmember C (who had six years’ experience) were changing a chain-link on the starboard trawl door.

Crewmember A (who held a Skipper Limited Certificate of Competency and had 22 years’ experience) found that the chain-link was jammed against the door and inaccessible in that position.

He requested that the winch be slacked to allow the chain-link to be released. The Skipper slacked the winch and switched off the winch power. This placed more weight on the dog chains.

The chain-link was now more accessible, however the trawl door was now more susceptible to movement as it was less secure. He then went to the workshop to get some tools.

As he was about to enter the hatch into the workshop that was close to the stern, he noticed that the starboard trawl door was sitting lower than usual, alongside the stern of the vessel.

No attempt had been made to raise it as they believed they could complete the task in situ and were eager to finish work for the day.

Crewmembers B and C were working on a chain-link that is attached to the trawl door. They were trying to change it as it had become worn. The chain-link was jammed against the trawl door and could not be released unless they slacked off the winch.

The Casualty became involved when Crewmembers B and C were unable to complete the task. When he saw the task was not complete, he took over the operation himself. There was no method statement or plan for this operation.

The Casualty reached down over the gunwale with his left arm on the starboard stern corner, to hold the chain-link straight so that Crewmember C could knock out the pin of the chain-link to release it.

He had to reach further down as the trawl door was secured lower than normal. The vessel rolled slightly to starboard and to port, and the ropes also tightened up.

Then the trawl door moved trapping the arm of the Casualty. The Casualty called out that his arm was trapped and the crewmembers who were working with nets, nearby on the deck, went to help him.

The crew attached a hook to the top of the trawl door via the stern A frame which was extended. They managed to winch the trawl door away from the hull. This enabled the Casualty’s arm to be released.

The Casualty’s arm was bleeding heavily down his sleeve. He was brought to the bridge where first aid was given by Crewmember B. He had recently undergone the three day BIM First Aid course in November 2020 and was able to assist quickly.

A quick response by Crewmember B to stop the bleeding, saved the life of the Casualty. Crewmember B said the others were unable to help as it had been a number of years since they had done either their BIM First Aid or Elementary First Aid courses (and one did not hold either at the time of the incident, while another could not evidence the certification during the investigation).

The ambulance was called, and the bleeding was stopped by the use of pressure bandages and a tourniquet. The ambulance arrived and the Casualty was stabilised and brought to Altnagelvin Hospital where he was treated for serious soft tissue injuries and heavy bleeding. He was discharged following treatment and returned to work in May 2021.

The “FV Marliona” had been fishing for five days at sea without incident and had arrived that morning to offload the catch and change the gear. They continued working after arriving at approximately 10.00 hrs when the incident happened some four hours later and were due to return to sea the following day.

No attempt had been made to raise the trawl door when planning to carry out the chain-link repair, as they believed they could complete the task in situ and were eager to finish work for the day.

There was no method statement or plan for this operation. There should have been as this is a particularly dangerous operation involving very heavy machinery. It would also be an operation that would be done regularly as part of the vessel operations.

A risk assessment for this operation would have highlighted that the loosening of the chain-link made the area more accessible, however the trawl door was now more susceptible to movement.

In addition, the original position of the trawl door was in a dangerous position from which to commence maintenance. The absence of a risk assessment for this operation and the incorrect positioning of the trawl door were causative factors to the incident.

After analyzing the incident, MCIB concluded to the following: