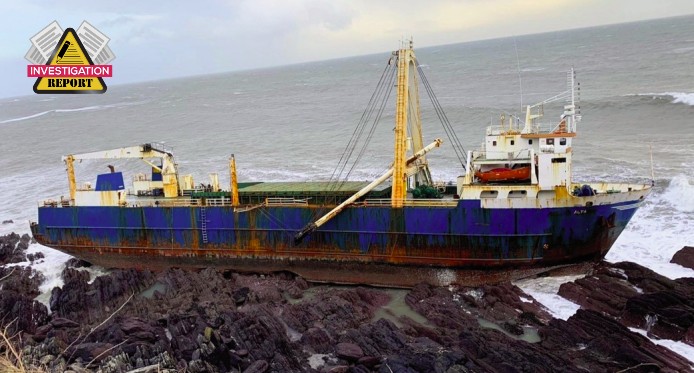 Ireland’s Marine Casualty Investigation Board (MCIB) issued an investigation report on the grounding of the general cargo ship MV Alta at Ballyandreen Bay, Ballycotton, Co. Cork, on 16 February 2020. The ship suffered a mechanical breakdown and was abandoned and set adrift by its owners and crew in October 2018.

The crew were stranded onboard after the ship was rendered irreparably disabled on a voyage from Greece to Haiti. ‘MV Alta’ was abandoned by the crew and left adrift in October 2018 after a US Coast Guard relief operation rescued the crew of 10 approximately 1,400 miles south-east of Bermuda.

On 3 September 2019, the UK’s Royal Navy ‘HMS Protector’ sighted the ‘MV Alta’, derelict in the middle of the Atlantic Ocean. The derelict drifted eastward and finally came ashore on 16 February 2020 in Ballyandreen Bay and grounded on the shore near Ballycotton, County Cork, Ireland.

As the derelict drifted into EU waters and the territorial seas of Ireland, the responsibility for responding to a maritime incident caused by collision with the derelict ship rested with Ireland and its maritime search and rescue agencies.

Following investigation, MCIB recommends the Minister for Transport, together with the Minister for Defence and the Minister for Agriculture, Food and the Marine, to form a working group comprising members from the Irish Coast Guard, the Naval Service, Irish Lights, the Sea Fisheries Protection Authority and other interested parties.

The working group should explore the risks and potential costs to the State presented by derelict ships entering Irish territorial waters and coming ashore in Ireland and make proposals for means to identify, monitor, track and interdict derelict ships before they endanger other ships and seafarers in the vicinity. The working group should be also aware of the EU dimension and be prepared to make recommendations to other European agencies including EMSA on their deliberations.